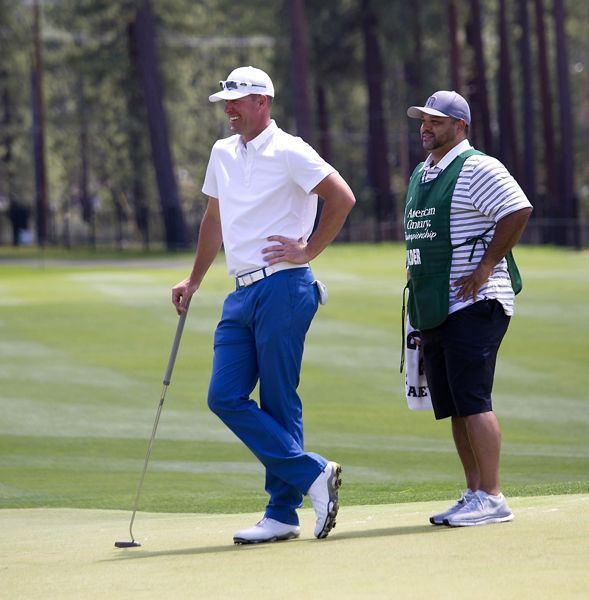 “I kept telling my caddie, ‘Keep me in the moment,’ because I kept thinking ahead a little bit. I couldn’t think straight. On 18 I thought I had to two-putt to win. When I missed that putt, I was so angry at myself,” Mark Mulder told NBC. Photo Copyright 2015 Carolyn E. Wright

STATELINE – Former Major League Baseball pitcher Mark Mulder threw a curve into the final round of the American Century Championship Sunday by winning the golf tournament for the first time.

With family in tow, Mulder won with 82 points (5-under 67 on Sunday’s final round) by edging out ex-Los Angeles Dodger Eric Gagne by one point and Jacksonville Jaguar kicker Josh Scobee by three.

Upon the last putt on the 18th hole, Mulder threw his arms up and his wife and three children soon joined him. They’ve been a steady presence throughout the tournament. Then, he held up the trophy and the crowd cheered.

“It feels amazing. I’m not going to lie. It’s something I think about all year long I guess, leading up to this,” Mulder said during the press conference where his son Xander joined him. It was like a Golden State Warriors Steph Curry post-game moment. 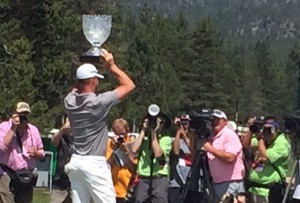 Mulder practices through the year in Flagstaff where he feels the higher altitude will help his golf game here at Lake Tahoe. His odds here were 8:1, making it “a regret” he didn’t bet.

When asked by Lake Tahoe News whether he can relax now that’s he’s won despite admitting numerous times to feeling nervous, Mulder laughed and shook his head.

“I’m going to sleep so well tonight. To be honest with you, the last couple of nights I didn’t sleep (so) terribly. I just didn’t sleep that great. And people don’t understand, this isn’t what I or any of the other guys (do for a living). So you put me on the mound in front of 100,000 people, and I could (not) care less. You put me in front of a couple thousand people, and it’s a different animal. I see guys make fun of PGA Tour players when they hit a bad shot. People don’t understand how stressful this is and how difficult this is,” he told Lake Tahoe News. “It’s taken me a few years to kind of understand what it takes to win this. I played with ex-winners or previous winners in previous years, been paired with them. I’ve seen what it takes. So I think that’s all a part of that preparation for today I guess.”

Mulder had a point about the stress level of so many people staring at such a close distance. It seemed the whole spectator crowd had gathered at the 18th hole to watch Mulder, Scobee and Gagne duke it out. A hush came over the crowd, which was more subdued Sunday than the day before at the afternoon hour. 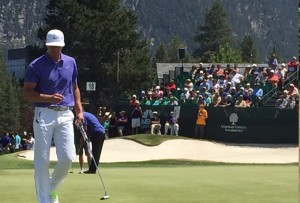 Saturday afternoon featured a sombrero worn by Scobee’s caddie, a foot race between a sponsor and one-time center fielder Kenny Lofton and a mass autograph session that took almost an hour for entertainer Justin Timberlake to move off the course.

Mulder admitted Saturday at the end of the round that he “didn’t start out great but ended strong.” He just tried to stay consistent. Multiple winner actor Jack Wagner even gave a tip to his fellow leaders Mulder, Scobee and Gagne – focus on the putting, and in particular, the 4-footers.

Mulder had a 35-footer on hole 12 Sunday and way overextended with the ball ending up at the bottom of the green. He still pulled off a bogey, a rally that proved instrumental in his success.

Despite the occasional snafus and distractions associated with this golf tournament, Sunday was all about the business in hand. And Mulder had the upper hand. Even the crowd seemed to appreciate his family ties watching most every move.

When they weren’t watching the leaders, Florida friends Margo Roca and Sharon Popa took in their favorite part of the event – the scenery. They’ve attended three times.

“We like the scenery on this walk. We don’t have this in Florida. To see the beach on one side and the mountains on the other, it’s gorgeous,” Roca said.