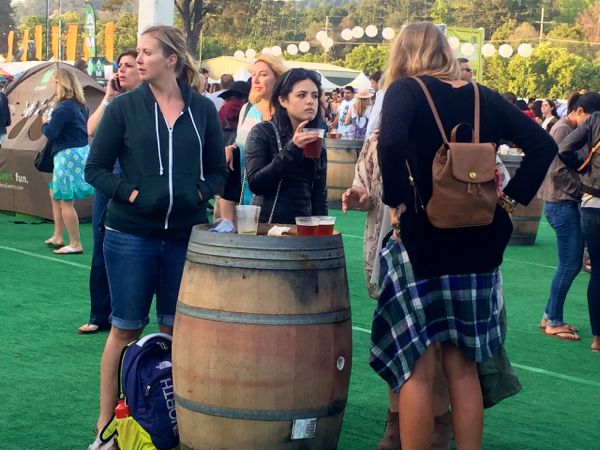 Small touches like a wine barrel as a table add local flair at BottleRock in Napa. Photo/Susan Wood

As South Lake Tahoe ponders showing off its own outdoor concert venue near the Lake Tahoe Airport, the city will have plenty of examples of communities to look to that have set the stage for the growing industry – the latest being the three-day extravaganza at BottleRock Napa.

The South Shore is no newcomer to outdoor concerts. Consider the highly successful version at the Harveys Stateline parking lot bringing big, one-night acts such as Elton John, Kenny Chesney and Imagine Dragons this summer. Then in winter, resilient crowds of more than 40,000 techno music lovers flock to SnowGlobe’s multi-stage grounds near Lake Tahoe Community College over three nights on New Year’s week.

In addition, the North Shore contributes with Wanderlust at Squaw Valley. Beyond in the Sierra Nevada, the Strawberry Music Festival in Grass Valley hosts many acts, along with other, numerous, pop-up, smaller venues. 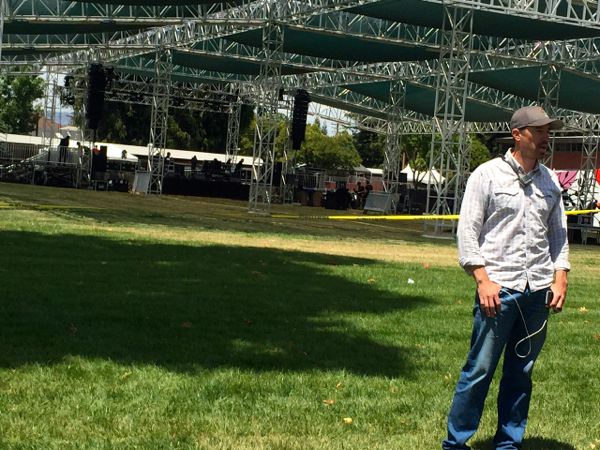 Fun and frolic aside, these festivals and concerts represent a serious business trend for concert promoters and musicians, according to Pollstar. The trade publication covering the global concert scene has seen a growing business model for artists. While the public’s consumption of music has never been greater, the ability of artists to financially monopolize on that demand has declined, Pollstar says. Digital sales and streaming revenues have lagged in replacing the reduced income from recording and publishing. So artists must hit the road to make money.

The North American concert industry mushroomed to $6.2 billion last year, with the explosion attributable to one single, large factor – the increasing proliferation of large multi-day music festivals. This year’s global calendar confirmed 1,500 events in 70 countries, according to Pollstar.

Moreover, the growth is led by average ticket prices jumping 2.8 percent to a record $71.44.

“The only way touring artists can make money is touring. They need to if they want to make a living now. A lot of the old revenue streams have dried up,” Pollstar music media representative Gary Bongiovanni told Lake Tahoe News.

So, here’s more power to the cities that provide a place to perform, he indicated.

“Whether it’s public or private money financing it, we’re seeing growth from the 20,000-seaters to the much smaller jazz- and family-oriented places for 5,000 (people),” said Bongiovanni, who has covered the music scene for 33 years. 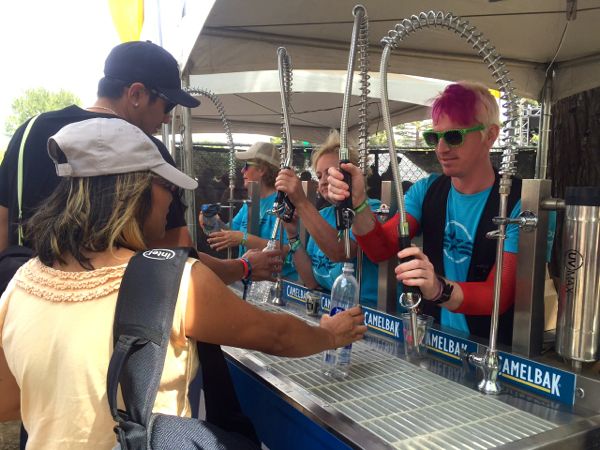 CamelBak’s hydration station is as busy as the alcohol booths at BottleRock. Photo/Susan Wood

A sense of place

Bongiovanni believes if South Lake Tahoe can pull off hosting such an event tucked in the trees on a now deemed 30-acre site proposed at Melba Road and Kyburz Avenue below Highway 50, it would be a win-win for artists and the community.

“Lake Tahoe is ideal for these concerts. It’s picturesque; an idyllic place to see outdoor music shows. My first question is whether the population of South Lake Tahoe is large enough to support the facilities for an event like that,” he said, further stressing how the event needs locals and tourists to turn out to make it successful year after year.

Some infrastructure is already there on the property. There’s a concrete slab where one stage could go. Evidence of a sewer hookup is also there. The airport tower would make an ideal landmark.

For the natural environment, leaving most of the trees should provide a sound buffer and perhaps even a mystique to this proposed concert venue. 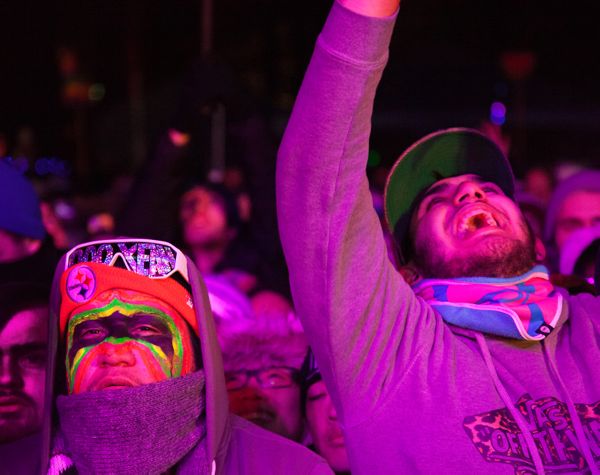 SnowGlobe in South Lake Tahoe is more like a rave catering to the techno crowd.Photo Copyright 2015 Carolyn E. Wright

South Lake Tahoe City Manager Nancy Kerry is batting around the idea, with the help of a strategic team. A cost-benefit study will be conducted.

“The idea is for the property to remain as it is,” she said, listing the planned thinning of trees and space for a proposed bike path as means to an end.

Kerry realizes events have been mounting in town, and they’re popular. Supporters believe each event has its own special market, venue and vibe.

“SnowGlobe demonstrated 15- to 40,000 people would come to a concert in the forest if we have it,” she said. The city has also tapped into the Electric Forest website that illustrates a laid-back vibe where those who appreciate good music expand their own creativity in attendance. Picture hula hoops, and peace, love and harmony without Woodstockish drugs as the focus. It’s a good-to-be-alive feeling.

Imagine. This is all from Tahoe’s own natural beauty.

“A lot of these event venues capture the natural surroundings,” Kerry said. 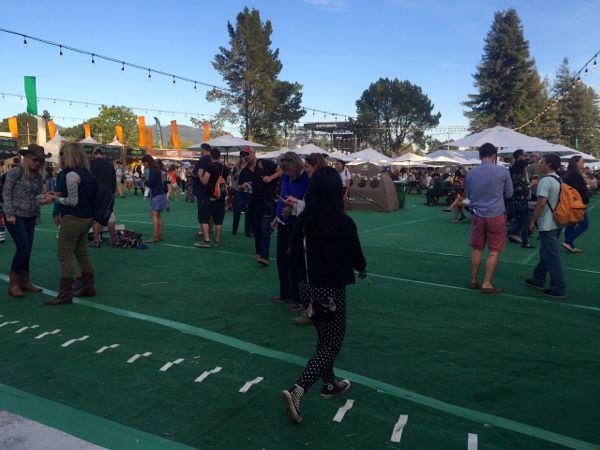 The key to making it a success is maintaining Lake Tahoe’s unique charm and character.

This theory was even expressed by a Napa resident attending last month’s three-day BottleRock giant outdoor concert in her hometown.

“Tahoe can do this, but it needs to keep its own identity. The Nevada side has money. The California side is where the people really appreciate recreation. Don’t lose yourselves trying to be some place like Napa,” Erin Crain said, while standing in BottleRock’s concessionaire square on the Friday night of the festival.

Crain stood in front of the wine bar serving varietals like a Rombauer Merlot. Other wineries such as Butter, Napa Cellars and Del Dotto had their own tents, some like the latter, with extravagant seating areas to provide an elegant wine experience.

“We wanted to create a staging area to reflect the elegance of Del Dotto,” winery worker Kristina Ambra told Lake Tahoe News while buffing the chandelier the day before the concert weekend began during a media tour.

This may not be a Tahoe experience, but the South Shore may embrace brewmasters, climbing walls or stand up paddleboarding as symbols of this unique area. Ideas abound relating to tents and stations that capture Tahoe’s outdoor nature and pristine environment. One of BottleRock’s nice touches Tahoe lovers could relate to – CamelBak’s watering hole, a station where a line of the Petaluma-based workers consistently dispense water in concert goers bottles.

Concert-goers were using turned-up wine barrels as waist-high tabletops. (In Tahoe, picture sawed off tree trunks serving as tabletops.) Off to the side, tents camouflaged trash and recycling cans.

Besides drinking, foodies also relished the BottleRock experience with a variety of Napa tents designed to tempt the taste buds. It seemed the Whole Foods Market food truck was one of the busiest, situated next to Kara’s Cupcakes. That Napa dessert mainstay served a steady line until it ran out of cupcakes about 9pm, an hour before concert-goers cleared out Friday night.

There was even a culinary stage where concert attendees watched renowned Chef Masaharu Morimoto teach rapper Snoop Dog how to roll sushi. The crowd gathered for that event had people backed up 50 feet away.

But above all, it was BottleRock’s music that was a hit and plentiful – with bands appealing to all age groups with the variety of genres. The contemporary hit band, Imagine Dragons – which will appear at the Harveys Summer Outdoor Concert series next month, cranked out its assortment of chart toppers such as “I Bet My Life,” “It’s Time” and “Demons.” (The bass player is from Forestville in neighboring Sonoma County.)

The crowd – about a football field long took it all in – some swaying and dancing, while others played corn hole and chatted in the back. Laura Palmer enjoyed standing way back in the open space by the winery tents to watch the youngsters play in the grass. Even though the band members on stage looked like figurines, the acoustics were off-the-charts precise.

“People would go crazy in Tahoe for something like this. This is something all ages can do. Make it inclusive,” the Alameda resident said. Palmer added she liked BottleRock’s set up because of the open space where she feels she can breathe and watch the entertainment and be entertained by the kids.

Laurie Smith, a 20-year resident of Napa, admitted she attended BottleRock two years ago to watch her son for a different reason.

“I came to make sure my son didn’t get high,” she said, laughing next to the Whole Foods food truck. “I like it this year. I would call it a success. Good wine, good food, the best weather.”

Concert promoters take note: these parents may be onto something – appeal to varying members of the household.

In its third year, BottleRock has been deemed a massive success – especially compared to the first two years when vendors were late getting paid and crowds clogged the 26-acre site. Easy traffic flow was critical for the three local men putting on the event – Jason Scoggins, Justin Dragoo and Dave Graham.

Graham’s advice to South Lake Tahoe wanting to put on a successful multi-day concert was simple – have a local organizer do it.

“It’s difficult to be an outside entity and putting this on. There are a lot of things you have to weigh, constituents to deal with,” he told Lake Tahoe News in a flurry of busy work the day before the concert started. “You definitely have to have a thick skin.”

And above all: “Start early,” he added, reporting a two-year runway for putting on BottleRock. He laughed at the thought others told him he was “crazy” for trying to conduct such a feat attracting more than 100,000 people over three days. “But it’s as good and better as it was planned.”

Many commented about the planning and design of BottleRock.

And even though BottleRock’s quest was to attract varying concert-goers with different musical tastes, it helps if some of them have money to splurge. While single-day tickets went for $109 and three-day passes sold for $275, the VIP passes cost $595 for the weekender. This means special service, a more pleasurable lounge place and an elevated seating area.

The city of Napa had no immediate report on tax revenue figures from the festival, but the Napa Downtown Association appeared initially happy about the outcome.

Although retailers show little sign of any burst in business because concert-goers “don’t come to shop,” Smith referenced the restaurants, which get “slammed” through lunch and up to the evening.

But there is a bit of a catch.

This may be a topic of conversation next year. BottleRock organizers have already announced the 2016 dates. They fall on Memorial Day weekend.