With cowbells clanking and a Kentucky-Derbyish announcer yelling in the background, history was made Saturday in South Lake Tahoe with the Women’s Amgen Tour of California wrapping up its second day.

Leah Kirchmann of Canada, riding for Optum Pro Cycling, won the stage of the largest and first tour in the United States – inspiring hundreds of little girls and cycling enthusiasts in her path. Coming in second was U.S. rider Lauren Komanski, who also holds the distinction of being the yellow jersey winner for overall best time after two days. Trixi Worrack of Germany placed third.

They race in Sacramento on Sunday.

Front and center of the commotion at the finish line on May 9 was Joanna Lilly, a recreational rider who brought her two daughters, Alice, 7, and Zella, 5, to watch the spectacle.

“I encourage them to do every sport we have to offer. They ride. They ski. They play soccer,” Lilly told Lake Tahoe News. The enthusiasm was marked by spectators banging on the barricades.

It was a day of encouragement all around. It was also a day to propel women’s cycling a step closer to being on an even playing field with the men and a day to place Lake Tahoe on the proverbial publicity map. 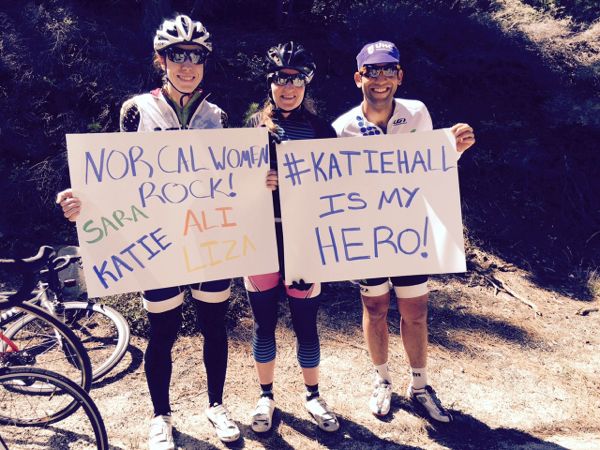 The South Shore loop was marked by a blink-and-you-miss-it blur of 70 riders who whizzed by for two laps between Heavenly Mountain Resort’s California Base Lodge, down Pioneer Trail to Meyers and back.

About a dozen people had gathered on Highway 50 in the heart of Meyers with many others up Apache Road to see the riders snake through town.

Kyle Anton of Meyers brought his two young daughters on a walk to perch themselves on a rock near Steve’s Transmission.

“It’s important for them to see women athletes to give them encouragement and to show them they can do whatever they want to do,” he said.

When asked if Dylan, 6, had ever seen a professional, competitive race like this, she blurted out: “On TV.” 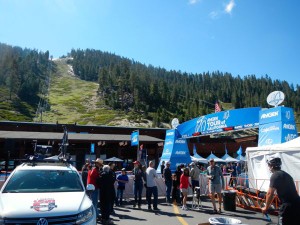 Dickson Brown of Stateline, who makes a point of catching the Tour de France on television, was not going to miss the up-close-and-personal view of a large-scale cycling event in his backyard.

“To have something like this, people should come out to support it. A lot of people thought: ‘Oh, this is only the girls,’ but women’s sports need to be supported as much as men’s sports because they don’t get the money or the limelight the men do. They’re dedicated and give up a lot of their time,” he preached.

Brown was so eager to see the race he parked along the route early, an hour before the ride started at 10:30am and waited for friends. They were headed up Apache to get a view of the women climbing.

“You can get a good idea of who’s riding well and who’s not riding well,” he said based on the riders’ ascent.

Graeme Holdsworth wanted to get a clear view of how his friend, rider Jo Hogan, was doing by preparing to also ride his bike up Apache.

“It’s a good route. It’s picturesque, but since it’s snow country, the road surface is in not that good of shape,” said the Australian. He rode the route earlier this week.

When asked if he could keep up with his professional rider friend, he declared a resounding: “No.”

Across the highway, John Hoefer felt right at home with his lone lawn chair – living the nostalgia of days gone by trying to keep up with his boys.

“My sons were all bike racers,” he said. 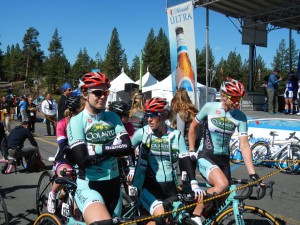 Teams line up for the second stage that had riders race a loop on the South Shore. Photo/Kathryn Reed

Over at Ski Run Boulevard leading up to the end of the first lap, Wendy Mains of Roseville expected a larger crowd. She showed up at Pioneer Trail and Ski Run with her Sacramento-area friends.

“I had no idea this was going on (before we got to Tahoe). This is great. We walked everywhere expecting to see more people,” she said.

Her friend, Dana Eagen of Loomis, agreed, wondering if it’s just a late-bloomer thing for Americans to appreciate a sport that is so big overseas.

“This is typical of Americans trying to learn a European sport. It’s like trying to teach football to a Spaniard,” he said. “This sport is all about Europe.”

That trend is something the Women’s Cycling Association would like to do something about.

“History is being made, and we’re making a powerful statement – that women belong in big time stage racing. When you look at this, it’s a huge step in the right direction. There’s still work to be done, but we’re encouraged Amgen stepped up to the plate and expanded the women’s race,” Jill Gass, a coach from Revolution Coaching, told Lake Tahoe News.

She was especially enthusiastic about a slim margin between the leaders.

“I thought the finish would be more spread out. The women’s race should be super exciting (by the end of Sunday),” she said.

The peloton at Portal Drive and Highway 89. Photo/Kim Wyatt

Gass was joined by Inga Thompson, a three-time Olympic women’s cyclist, Tour de France winner and 10-time U.S. national champion. Thompson expected more advancement from the sport in the last few decades, but she’s happy with any progress. She retired from racing in 1993.

“Women’s racing has gone downhill through the years, so it’s big to see Amgen bring back the three-day race. We’re rebuilding from 30 years ago. I applaud it,” Thompson told

Riders a bit younger were at least encouraged to see people.

“This is one of the best supported races I’ve ever been in,” Alison Tetrick of Petaluma said, while resting after the race with her winning teammates. Optum had just won the stage for Day 2.

“The crowd was large and boisterous,” she said.

“I feel like not many people knew about it,” Sacramento rider Amanda Seigle said after the race. Her friend and fellow rider, Tina Hughes, shared how a few of her South Lake Tahoe friends and neighbors didn’t know the race was going on.

The duo would like to see the women’s race staged in conjunction with the men to ensure a larger turnout.

“But this was a nice boost to women’s racing,” said Seigle, who rides for Jakroo Racing.