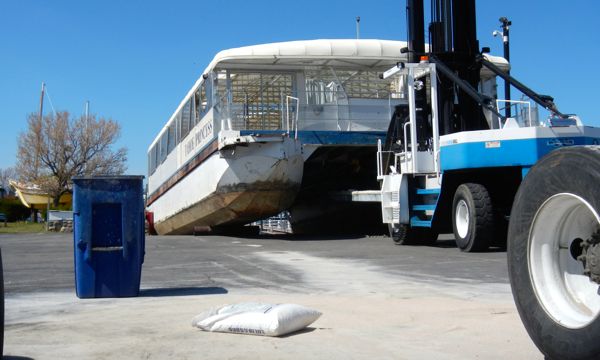 The Tahoe Princess hit a snag April 10 will being pulled out of the water at Tahoe Keys. Sand covers the spill area. Photo/Kathryn Reed

The Tahoe Princess looked like anything but royalty as it sat Friday afternoon on the Tahoe Keys Marina boat ramp.

Vernaza recently purchased the pontoon tour boat from Aramark. His plans are to overhaul the vessel and return it to its glory days. To do so it had to be pulled from the water.

One semi-truck was on either pontoon, dragging the boat onto pipes. With the boat just barely out of the water, one of the hydraulic lines on a tow vehicle busted.

Operations stopped so officials could assess the situation.

El Dorado County environmental health and South Lake Tahoe firefighters responded to the hazardous waste spill. The county inspector ensured all the oil was cleaned up, asking for a receipt once it was disposed of and said a fine could be forthcoming. The California Office of Emergency Services also must be notified.

While a boom was placed about a dozen feet from the water line into the marina, no oil is believed to have made it into Lake Tahoe. An absorbent sand-like substance was placed onto all areas of the parking lot where the oil leaked. It will be secured and hauled to a hazardous waste facility in Nevada.

The goal April 10 was to use the pipes as rollers to move the nearly 60-ton boat to a storage area at the marina. It had to be done this way because trailers don’t exist for this type of watercraft. Vernaza expects to spend the next six months refurbishing the Tahoe Princess. It was beaten up during the winter when it broke from its mooring at Zephyr Cove and was banging against the rocks. A sundeck platform will be added to the top. Vernaza said it would be nicer, newer and modern when the overhaul is done.