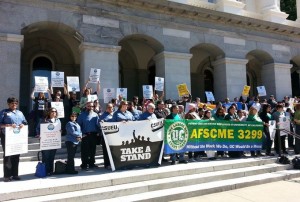 Higher education students, including those from Lake Tahoe Community College, and staff marched on the Capitol Building Thursday to express their frustrations with Gov. Jerry Brown and UC President Janet Napolitano.

Brown is threatening to cut $120 million in funding to the University of California system if there are tuition increases and more out-of-state students admitted, but Napolitano promises to do both of those things unless the state can come up with a $219 million bump to those schools.

As the UC and CSUS systems are deciding how to serve students, who gets in and who’s left out next fall, Brown and Napolitano have formed a committee of two – a closed door negotiation to hammer out a deal for next year.