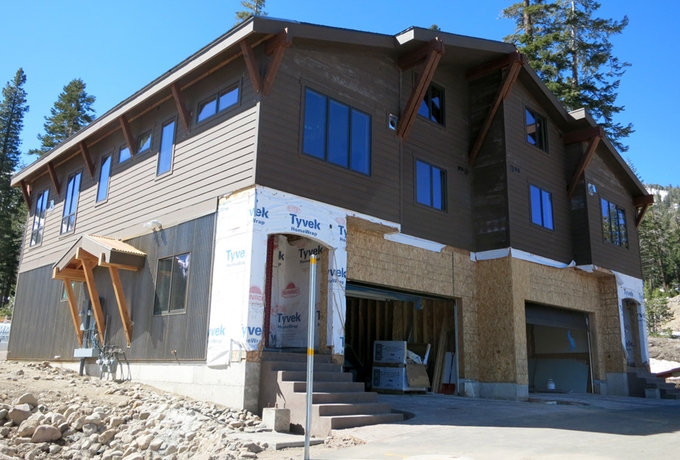 Kirkwood real estate officials are confident the market has turned and are beginning to build. Photo/Jessie Marchesseau

KIRKWOOD – By the time Kirkwood closes its lifts for the season, the new townhome building under construction near the Timber Creek Village should be completed. This building, the first in the development, houses two townhomes in what is slated to become a 21-unit complex.

Situated right at the base of Timber Creek, the Timber Creek Townhomes will be eight buildings of ski-in, ski-out residences. The development will eventually take over what is currently the Timber Creek parking lot, with parking spaces being relocated to across the street.

The Timber Creek Townhomes are the first multi-family residential development at Kirkwood in more than five years and the first one by Kirkwood Resort Development in more than 15. Sentinels West, directly across the street from the TC Townhomes, was built by a private developer between 2006 and 2009. Though Kirkwood Resort Development did a series of single-family projects in the early 2000s, the group hasn’t taken on a large multi-family project since the Mountain Club in 1999.

So why did KRD decide now was the time to get back into the residential real estate game? According to Peter Forsch, chief executive officer of Kirkwood Resort Development, now is the ideal part of the market cycle for them to step in. Real estate prices have been climbing in the Bay Area for the last few years. Historically, Kirkwood and Lake Tahoe real estate lags behind the Bay Area market by a couple years. So Kirkwood is experiencing what Forsch predicts is just the beginning of a market upswing.

Though relatively new to Kirkwood, having joined KRD in January 2014, Forsch has been in resort development for decades working in areas such as Aspen, Jackson Hole and Big Sky. In his experience, the developments that position themselves at the beginning of the market cycle have more successful outcomes than those that wait until the market peaks. With this in mind, KRD started this project last summer in anticipation of market improvements.

Real estate at Kirkwood has been holding steady for the last year or so, but Kathy Walters who has been selling real estate at Kirkwood Mountain Realty for 18 years said she expected to see the rebound a little sooner. The majority of Kirkwood homebuyers come from the Bay Area, and as the economy there improved, she expected to see that affect Kirkwood as well. But this year’s drought and below average snowfall kept a lot of skiers and would-be buyers away. The real estate market at a winter resort like Kirkwood is directly related to the amount of snowfall. Walters told Lake Tahoe News she believes the market is stronger overall than it has been in past years, but could be a lot better if there were more snow. 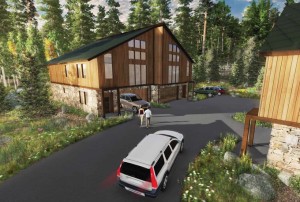 This is what the townhouse will look like when completed. Rendering/Provided

However, market conditions were not the only aspect driving KRD’s decision to break ground on the TC Townhomes. Nate Whaley, chief financial officer for KRD, explained they believed this particular project was perfect for what consumers want right now. The townhomes are moderately sized with three and four bedrooms between 2,000- and 2,400-square-feet. This represents a downsizing from the huge houses of the boom and is more manageable for families.

KRD is also taking cues about what consumers want from other nearby resort developments such as Northstar and Martis Camp, and considering where the majority of buyers are coming from right now, specifically the South Bay and Silicon Valley, and what is important to residents of those locales. The result is a residential project which boasts energy efficiency, sustainability, advanced technology, low maintenance materials, ski-in ski-out amenities and an overall mountain contemporary design. And they’re doing it for a fraction of the price their contemporaries on the North Shore are.

But Forsch acknowledges that the people buying at Kirkwood are not necessarily the same ones wanting to buy at Northstar or Lake Tahoe. Kirkwood does not offer world-class shopping or five-star dining. There is little night life and no bright city lights to speak of. People who buy here are looking for a more authentic, outdoor, away-from-it-all experience.

Until recently Kirkwood was not even connected to the electrical grid, but generated power for the entire community with diesel generators. It may seem that being connected to a reliable and consistent power supply might be a big deal to potential buyers, but Walters said she has not seen that to be the case. In her experience, Kirkwood buyers never seemed to be concerned about electricity issues in the past, and that hasn’t changed.

Vail Resorts moving in and taking over ski area operations has not had much of an affect on Kirkwood’s real estate sales either. Walters said she believes knowing Vail’s positive track record gives people added confidence in the resort on the long-term and has brought in new potential buyers who were passholders at Heavenly or Northstar, but has by no means caused a buying frenzy. The Kirkwood buyer is still someone who is in it for what the mountain itself has to offer, which is some of the most challenging terrain and deepest snow in the Sierra.

“The Kirkwood buyer is a really special person,” Walters told Lake Tahoe News. “They know a good thing when they see it.”