Keep the airfield as it is while providing flexibility for other uses at the airport was the consensus Monday night of the nearly 60 people who attended a meeting about the Lake Tahoe Airport master plan.

This was the third and final meeting before preferred alternatives are defined. Those will then be studied in environmental documents. Comments on all alternatives will be solicited for another month.

It’s possible the whole process could be completed in summer 2016.

It has been about 23 years since the city did a master plan for the airport. The goal is to define what it will look like for the next 20 years.

Last year the City Council said the airport will be a general aviation facility and commercial air service will be a thing of the past. However, it’s possible those priorities could change in the future. And the City Council at its last meeting approved an economic study be done for the airport. This will be incorporated into the business plan for the facility. 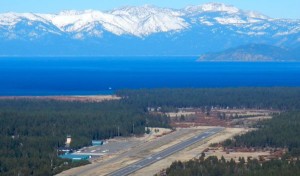 Michael Hotaling, the consultant preparing the master plan, on March 16 said the FAA – which is picking up 90 percent of the costs to prepare the plan – focuses on safety, security, sustainability and capacity. The city may have other priorities, but the feds’ desires by virtue of being the banker, so to speak, carry more weight.

With this being Lake Tahoe, environmental factors also play a role. So, while it might be a good idea to cut down trees for safety reasons, the Tahoe Regional Planning Agency gets to weigh in if they should be removed or some other mitigation done.

Air quality, compatible land use and stream environmental zones are potential constraints for any future development at the airport.

Some of the 14 people who spoke Monday night brought up:

• How the airport has virtually no services; that it requires flying somewhere else to get the bugs off the plane because they cannot be washed at this airport.

• The need to lower the rent on hangars.

• The desire for new instrument approaches.

• The idea to create an airport district like what Truckee has.

• The savings of giving up the FAA certificate that allows commercial service. (The 139 certificate is on today’s City Council agenda.)

The city’s subsidy to operate the airport has dropped 43 percent from 2010-11 to 2013-14, with the cost at $352,000. That could drop about another $120,000 by giving up the 139 certificate. Most of the certificate’s expenses are related to training firefighters to deal with a commercial airliner crash.

At this week’s meeting everyone had the opportunity to vote on the plans they liked best. Most want to keep the runway, tarmac and apron as they are.

Hotaling brought up reasons the city might want to consider lengthening or widening the runway – mostly to keep up with changing airplanes and specifications. But it was also noted that even though the Gulfstream V and planes like it are likely to be more common in coming years, pilots could land and take off at their own discretion.

The current 8,541-foot runway is not optimal for a Gulfstream in the heat of summer. Optimal conditions are for an 11,000-foot runway.

But no one has come forward advocating to lengthen the runway, nor do they want to shorten it.

Based on the alternatives being voted on Monday people are behind improving other amenities like adding a self-fueling station – which could lower the price per gallon of jet fuel, creating hangars to accommodate larger aircraft, and designating a swath of land east of the airport as non-aeronautical (this would allow for a potential concert venue).

More information about the master plan may be found online.