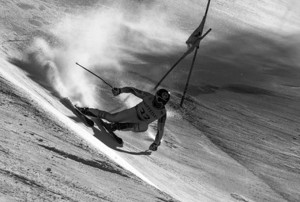 BEAVER CREEK — When the Alpine world ski championships were last on American soil, in 1999, no member of the United States team won a medal. With the championships back in Colorado this month, the event was expected to be a chance for the American racers to show how far they had come as an international power.

Instead, during the first week of competition, the Americans’ lone reason to celebrate was Lindsey Vonn’s bronze medal in the super-G.

By Saturday, the pressure on the Americans was mounting. The United States racers, many of whom were unheralded in the country, had to enter the men’s downhill, the championships’ marquee event, without their best-known teammate, Bode Miller, who severed a hamstring tendon in a tumbling crash Thursday.

But in a startling recovery, three American racers burst into the top 10, led by Travis Ganong of Squaw Valley, who won the silver medal Saturday with a fearless, stirring descent that left him 0.24 of a second behind the winning time of Patrick Küng of Switzerland, who finished in 1 minute 43.18 seconds. Another Swiss skier, Beat Feuz, was third, 0.31 of a second behind his countryman.