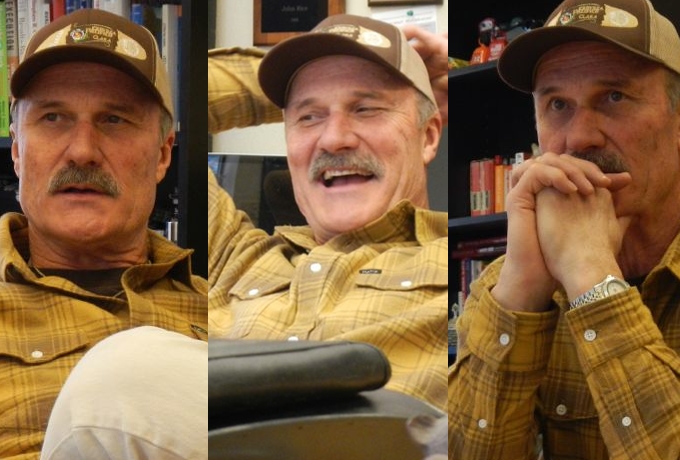 John Rice is the man credited with making Sierra-at-Tahoe a success. Photos/Kathryn Reed

TWIN BRIDGES – Two guitars, skis, books, cards and pictures in an office that looks toward Grandview chairlift tell a colorful story of the leader of the band at Sierra-at-Tahoe. John Rice is a fixture in these parts – a quasi cross between a Tony Robbins and Deepak Chopra for the ski industry.

He appears to have come out of the gate in his 20th year at the resort with the same level of enthusiasm, playfulness and philanthropic nature that he had on Day 1.

Even though the ski resort lies 12 miles away from South Lake Tahoe, Rice connects year-after-year with the town in his own impressionable way. If anything, the numerous people who have worked for and broken bread with him sing his praises and attribute much of their successes to the man who provided them with that foundation to carve their own path.

He gives back with his time on boards for Lake Tahoe Wildlife Care and Lake Valley Fire Protection District. He runs a widely successful campaign that started in 1997 to give ski passes to students who carry a 4.0 grade point average. He snickered when reflecting on a time when his boys buckled down to get straight A’s – feats Rice didn’t know for sure would happen.

Rice is loved, revered and honored in the hearts of those who have graced his slopes, his offices, his community and his home. Some may be lucky enough to hear a self-composed song, which exemplifies his roots. His mother, Jane, is a professional singer, and daughter Delaney is following in their footsteps. His late father, Jim, was a professional baseball player, a talent and desire he has passed down to his two sons.

Rice experienced his “field of dreams” with Brandan and Ian when they played 54 innings over four days in a men’s league in Arizona; with the trio hitting each other home. Rice enthusiastically ran the slide show of pictures with John Fogerty’s “Center Field” providing the harmony for their precious time together. He had the gleam of a proud father, never too tired of watching his sons.

The show reminded Rice of the time when in his 40s he hit two home runs off Vida Blue at AT&T Park for a Budweiser-sponsored event. 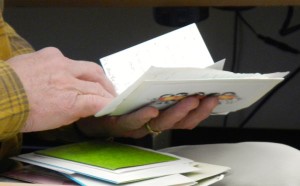 Former employees frequently keep in touch with John Rice and thank him for his leadership. Photo/Kathryn Reed

That is Rice’s mission statement, and it shows every day, according to Megan Waskiewicz. She worked for Rice between 1995 and 2001. She described coming on board at a pivotal time when she first moved to South Lake Tahoe for a ski season. She sold lift tickets. She left as the spokeswoman for the resort.

“I stayed because of John. (He) is all about people, the relationships, the customer service. He connected with me, and I took that relationship focus to Alpen Sierra,” she said of the coffee company she helps run with her husband, Christian. She recalled adapting principles including customer service training meetings at Alpen Sierra.

“John has been instrumental in my career,” she said.

She is one of many staffers who have gone on to advance their careers in a big way.

“He brought a fresh perspective to leadership. He’s very different than the leaders that come up through the ranks of mountain operations and ski patrollers,” said Casey Blann, who runs Vail’s Kirkwood Mountain Resort as general manager. Blann was Sierra-at-Tahoe’s mountain operations manager under Rice.

“He’s a great guy and fun to work with. I learned a lot from him. He led during tough times,” Blann, singling out the Highway 50 shutdown in 1997, told Lake Tahoe News. “He has an HR (human resources) mindset where you put people first.”

As his human resources manager, her tenure with Sierra-at-Tahoe under Rice has led her to work for Squaw Valley.

“He focuses on what’s right. That’s what makes him special. He leads from the heart, and it comes across in his style of management. I call him every month to get my ‘John Rice fix’,” she said of his spiritual side. 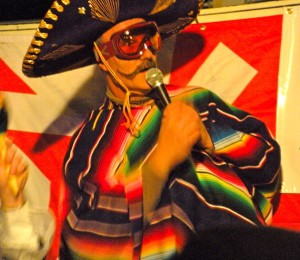 Having fun, creating “pray for snow” calls — it’s all in a day’s work for Sierra’s general manager. Photo/Kathryn Reed

“Here’s a guy who was beyond enthusiastic, not just about Sierra, but human resources as well. My philosophy moving forward in all my HR roles after Sierra was to bring that same level of enthusiasm to each position. Well, that was John Rice, and that is how I wanted to always feel about human resources, and thanks to John, I do,” said Lorraine Turner, Lake Tahoe Resort Hotel chief administrative officer.

At its peak, the ski area employs 850 people and 50 year-round. Rice tries to make a connection with all of them.

“There’s no one in Tahoe quite like John Rice,” said his former food and beverage director, Debbie Brown. The restaurateur calls him her mentor, friend, partner and father figure – as a five-star leader. She attributes her success to Rice’s gentle guidance. It helped her in advancing from running food and beverage at Stateline Brewery to opening her own place Cold Water Brewery where the Swiss Chalet sat for more than a half century.

“He encouraged me to get out of my comfort zone,” said Brown, who was responsible for getting the West Bowl concession area off the ground.

Tracy Owen Chapman, who served as his marketing manager, asks herself “in difficult situations, ‘what would John do?’,” she said. “I am a better person because I have worked with John.”

Molding souls and taking part in an industry about fun and frolic — it’s all in a day’s work for the 59-year-old Rice. It’s probably because it really isn’t work to him. It’s a way of life.

When the going gets tough

Case in point, despite brown spots on the slopes and a long wait for the snow gods to come through, the general manager rallies his troops regularly to keep their spirit and psyche up. He asks his groomers among other workers: “Did they put their best out there?”

He even got excited and pulled out a purple cow pin that workers get when they do something that distinguishes the Sierra-at-Tahoe brand. Employees wear it with pride.

Rice recalled how at a local eatery he ran into a former employee who was depressed and drank heavily before working for him at Sierra-at-Tahoe. She poured out her soul to him.

“She told me: ‘Sierra-at-Tahoe saved my life.’ So if I’m guilty of something in life, it’s that I cared too much,” he said.

Rice keeps inspirational authors like Betsy Sanders who wrote “Fabled Service” and Laura Moriarty of the human resources world as well as famed basketball coach John Wooden close to his vest. Rice pointed to a plaque on his wall detailing Wooden’s pyramid of success.

Sierra-at-Tahoe has operated with a focus of constantly seeking talent, then growing that talent from within. It’s something Rice learned early on from other movers and shakers.

“I’ve used the principles: Hire for attitude, train for skill. I’ve worked for some pretty amazing people,” Rice said, listing the late Alex Cushing of Squaw Valley as one such person. “I learned from him how to treat people and establish relationships, and that you never burn bridges because that person may be your boss tomorrow.” 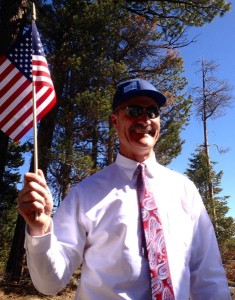 John Rice put on a tie for the 2014 Olympic celebration. Photo/Brooke Laine

Coach to be flexible

“Adaptability is the key to survival,” Rice said.

At no other time is that mantra more necessary than now, as drought conditions and dry weather patterns have forced some ski resorts to close and others to cut back this winter.

Instead, on a bone dry Martin Luther King Jr. holiday, Sierra-at-Tahoe put on a giant Jenga game, disc jockey and football punting contest on its massive year-old plaza. The resort even staged a pony race with inflatable balls and play unicorns.

Yes, there’s something magical about Sierra-at-Tahoe. And much of that scene is due to the leadership of John Rice.

“Mountain life was calling,” he said, adding that a tour of Chico State brought him to Tahoe in 1975.

“I saw a picture of that depth of blue and thought: ‘This can’t be real’,” he said.

Rice remembered pulling over on Highway 50 at the Echo Pass lookout and thinking: “Oh my God.” He rented a moped and stayed in an old wedding chapel one summer before going to work at Squaw over the winter.

And although he said he’s had “amazing job offers” over the years, Rice enjoys working for Booth Creek partners because the company nurtures that freedom to do what’s right. He would also miss Tahoe and its complementary lifestyle too much if he moved.

“I love being a part of the community. You know, I’m close enough to the ocean. And you know, when you go down to the lake and hear that clanking of the lines (on the boats) in the elements, the lake can look like the ocean,” he said like a poet.

Is there retirement in the future?

“When it stops being fun, I’m done,” he said. “As long as people think we’re adding value to the community and they trust my leadership, I’m here.”

Then, that could be a long time. 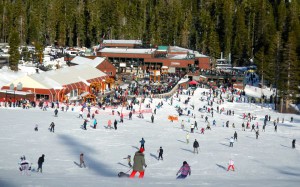 John Rice is responsible for all aspects of Sierra-at-Tahoe. Photo/Kathryn Reed

“John Rice is one of the most resourceful and creative operators in the industry. We have our share of corporate ownerships in this industry, and John stands out as an independent free spirit. In my book, literally and figuratively, he stands taller than anyone in the industry,” Roberts told Lake Tahoe News.

The state industry representative has been impressed over and over by Rice’s abilities, charm and for having the “personal gravitas” to overcome challenges and turn them into ways to excel. He insists Rice’s positive nature has “almost painted rocks” in difficult times of scarce snow conditions.

But how many ski resorts can boast of spawning three Olympic gold medalists? They are Maddie Bowman, Jamie Anderson and Hannah Teter. The resort threw a huge event last year to honor the three women. And this isn’t the first time Sierra has spawned Olympic athletes. Travis Cabral and Travis Ramos paved the way for the three young women.

“You know, he cultivated these kids,” Roberts said, remembering they were children when they started skiing and boarding at Sierra-at-Tahoe.

Rice put on a tie for the event and kept on the ball cap.

Roberts has seen one of those rare occasions from Rice with a tie in critical circumstances when an industry representative must stand in a courtroom to testify as an expert witness about snow safety.

“What people don’t know is he is an extremely articulate policy wonk,” he said.

The two have traveled together to the nation’s capital.

“John is an impressive guy – whether he’s in front of dignitaries in Washington or his employees. To his employees, he walks on water. I haven’t seen him do it yet, but he probably can,” Roberts said.

Maybe when the snow melts.