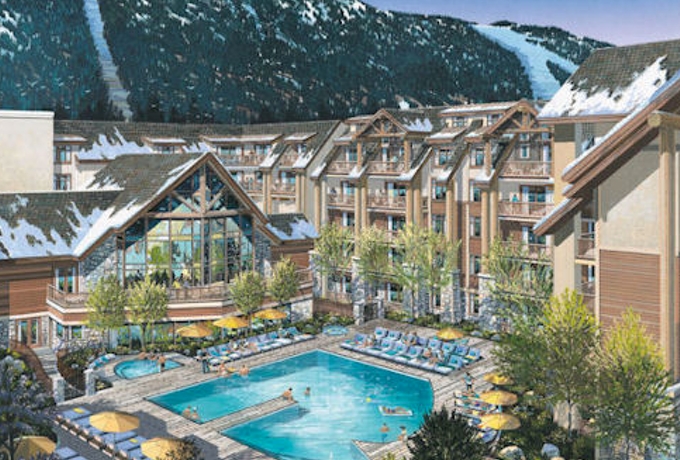 This is an original rendering of what the hotel and pool at the Chateau were to look like.

A 32-room four-star caliber hotel is being designed in what will be the next phase of the Chateau project in South Lake Tahoe.

Accompanying it will be a swimming pool, spa, nearly 19,000-square-feet of retail and open space. The pool will be designed to accommodate what will eventually be two hotels. This first one is permitted for 115 units, while the larger one is for 365 rooms. The bulk of the commercial will be completed in the next phase.

No price is being put on what the next phase will cost, though it is in the tens of millions of dollars range. The opening date could be winter 2017.

Design plans have been submitted to the city. Lew Feldman, attorney for the project owners, says construction could start this fall.

“It really is a testament to where the community is headed,” City Manager Nancy Kerry told Lake Tahoe News. She added that it is especially significant so soon after the initial retail phase of the Chateau opened.

This adds to the 10-year goal, with this being year two, of having $1 billion of private and public money invested on the South Shore. To date $300 million has been spent on upgrading the built environment.

Tahoe Stateline Ventures, the company formed to develop the 11-plus-acre site near the state line, is incrementally building out what was to be a convention center, two hotels and a retail complex. That was the plan that was permitted by the Tahoe Regional Planning Agency in 2008, but which got derailed because the original developer filed for bankruptcy. With the dissolution of redevelopment and the city’s not having a role in the project anymore, the likelihood of a convention center’s ever coming to fruition is slim to none.

What that aspect of the project might become remains to be seen.

Still, Owens Financial, the parent company of Tahoe Stateline Ventures, is continuing to believe in South Lake Tahoe. The completion of the next phase could mean the project would be in a better position to attract investors to complete the plans.

The first hotel project will be 32 rooms of what could become a 115-room hotel. It will be a hotel-condo project, with full ownership and the possibility of rooms being put into a rental pool.

Feldman told Lake Tahoe News it is too soon to know if the lodging property will have a well-known flagship or be independent.

This next phase will be adjacent to the Chateau retail that exists on Highway 50. The electric bike rental shop will be demolished. The retail will be on the first floor and the hotel-condo complex on the second and third levels. Rooms will be one-, two- and three-bedroom.

The streetscape along Highway 50 will be completed. For people not wanting to use Stateline or Friday avenues to access the property, a route via Cedar Avenue will be created. This will give guests better pedestrian access to Lakeside Beach, and those staying elsewhere greater access to the retail center.