Not getting a good night’s sleep is the least serious complication of sleep apnea.

Sleep apnea, a sleep disorder, is an often-overlooked condition that can contribute to more serious medical problems.

And for those living in Lake Tahoe or other high elevation communities, the threat is even greater. This is because there is two-thirds the amount of air in the basin compared to the Bay Area. The difference is the change in atmospheric pressure.

At higher elevations people tend to breath deeper and faster because they need air, but then they exhale carbon dioxide. But bodies need CO2. Without CO2 people can stop breathing, then they start hyperventilating. It becomes a vicious cycle. 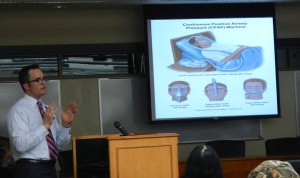 David Young with Barton Cardiology gave a lecture last week to about 80 people at Lake Tahoe Community about the dangers of sleep apnea.

“No one really knows a whole lot about sleep apnea. A lot more research is needed,” Young said. “I believe it is an under-diagnosed disorder, especially in Tahoe. Treatment can make huge changes in people’s lives.”

The best treatment today is a continuous positive airway pressure mask. The problem is people need to wear it every night about 50 percent stop doing so.

While snoring is the most common symptom of sleep apnea, not all snorers have sleep apnea.

Other symptoms include memory loss because of not having enough CO2 through the night, urinating at night, sexual dysfunction, depression and difficulty concentrating.

People are more apt to suffer from sleep apnea as they age, if they are male and are obese. Heavy drinkers and those who use opiates are also prone to sleep apnea.

The diagnosis, though, isn’t easy.

Barton has a sleep lab where a more complete diagnosis can be established.

At Barton Memorial Hospital everyone who is going to have surgery will be screened for sleep apnea. This is because anesthesia and painkillers after the surgery can inflame sleep apnea.

Young would like to see Barton hire a sleep specialist. He said a pulmonologist might be hired soon who would be able to help with sleep apnea.