The Benicia attorney, an advanced skier, had waited a while for a powder day in 2012. She finally got her wish on St. Patrick’s Day at Sierra-at-Tahoe where she volunteers. She and husband Eric were negotiating the black diamond Upper Dynamite run off Grandview chairlift when he suddenly stopped on a boulder. Just as he turned to warn her of a depression in front of them, she had skied by him. Next thing she knew, the snow gave way underneath her.

“I thought I was just swept up in an avalanche,” she said. 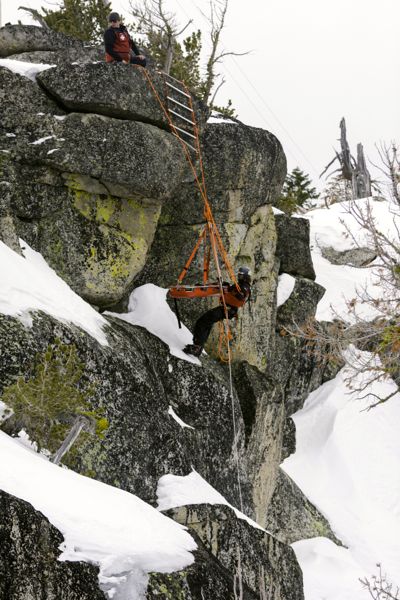 At a mere 5-foot, 4-inches, the snow enveloped her. She was conscious and knew not to struggle in order to conserve energy – especially since the snow was particularly wet and encased her like concrete.

Since the temperatures had been high, the water had been flowing in the creek below. She tried to make an air pocket, but attempts were futile in the eventual 10-foot tomb.

“I believed I was upside down,” she said.

Jacobson could feel snow embedded in her nose and ears. She was uncomfortable, frustrated and knew she was running out of oxygen.

“I blacked out. I thought that was it. I was going to die,” she told Lake Tahoe News.

Meanwhile, her husband had been working feverishly to get help. He tried to dig her out without being encased himself. She was buried so solidly, he pulled her glove off when trying to dig her out.

Luckily, a ski patroller and paramedic were on the lift and caught word of the incident.

After the longest 45 minutes of her life, the patrol team had dug her out using ropes and harnesses anchored to trees in order to keep the snow relatively stable. Jacobson was purple from being hypothermic and very close to being gone.

“Even the ER doctors were baffled,” she said.

Jacobson attributes her survival to the equipment the team used that day. 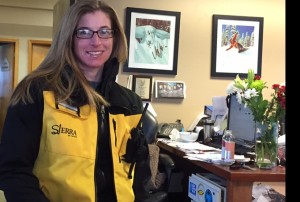 “I don’t know how they would have done it. I’m just incredibly grateful,” she said of the 10-minute rescue dig once patrollers arrived.

Sierra-at-Tahoe gained one victory and later others as a result of losing a tragic one. The equipment used to save Jacobson was bought with a fund established by the family of 22-year-old Philip Walker, a snowboarder who died in a tree well the year before Jacobson’s near miss.

“This was a really sad event that happened, but we’re happy we got good equipment to train for future rescues,” said Hugh Ham, Sierra’s assistant ski patrol director.

With about $1,100 left in reserve, the Philip Walker Rescue Fund has secured about $6,000 in clear goggles to help find lost riders in the evenings, ropes for both low- and high-angle rescues, headlamps, radio batteries and deep immersion snow signs. The hope is signs that read, “Stay clear of tree wells” and “Always ride with a buddy” would permeate the minds of those who want to venture into the trees.

That’s the message the father of the young snowboarder, who one day wanted to work at Sierra-at-Tahoe, wants to get across.

“There’s nothing we can do to bring (Philip) back. If anything, continuing on for him and saving someone else and possibly preventing this from happening again – that’s why we do this,” Steve Walker told Lake Tahoe News from his San Jose home.

“Tree wells are dangerous, even for an intermediate skier or snowboarder like Philip,” Walker said.

The family started the fund with $5,000 in seed money, notifying relatives from across the nation to donate in lieu of flowers at the boarder’s funeral service a week after his death on March 26, 2011.

The young Walker was skiing with his brother, Ben, and a friend when he went into the trees alone. Ben called his father at 5pm to tell him he couldn’t find Philip.

“That was gut-wrenching,” Walker said.

The ski resort was forced to call off the search that night because of a fierce storm and resumed it the next day. Walker, his wife and other family members waited out the news in General Manager John Rice’s office.

“I knew something was up when two sheriff’s deputies walked in the room. Unfortunately, I can’t get that image out of my mind,” Walker said while choking back tears.

He described the event as a sense of despair, helplessness and sobering.

“A friend asked me how long it took me to get over,” Walker said.

“I told him it’s like jumping into an icy lake. It takes your breath away, then slowly you get used to it. But you don’t want to,” he said.

The whole family went into grief therapy. Starting this fund is all a part of the bereavement process for them. The family’s goal of the fund isn’t necessarily monetary. It’s to ensure the equipment “makes a difference and to help others,” Walker insisted.

Beyond Jacobson’s story, there have been others who have benefited by a highly skilled and geared Sierra-at-Tahoe.

Rice shared in a letter to Walker the story of a skier who had fallen through a snow bridge between two large rocks and was stuck in a hole of 25 feet off the Huckleberry Canyon area. The patroller who responded requested the harness and pulley system purchased through the rescue fund.

“He was fortunate to have been skiing with a friend who knew where to locate him, but more so that our crew had the right gear to get him out,” Rice wrote. “Thank you to all of your friends and family who honored your son through the cause.”