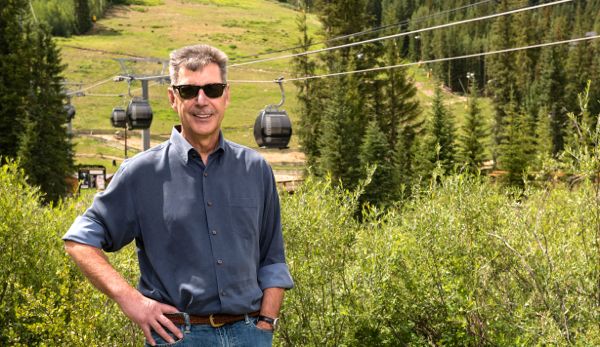 Blaise Carrig at Keystone, one of the 11 Vail Resorts ski areas he oversees. Photo/Vail Resorts/Jack Afflec

Blaise Carrig, the skiing guru who led Heavenly Mountain Resort during a critical crossroads, is forging a new path of greener pastures – with a little white stuff mixed in for recreation sake.

That’s because soon skiing will no longer involve business.

At 63, Carrig will relinquish his post as president of Vail Resorts’ mountain division next August to work as a senior advisor. Patricia Campbell, CEO for Vail’s Breckenridge Ski Resort in Colorado, will replace him.

On the horizon for Carrig is full retirement in three years.

“I’ll miss the people. I love being around the youthful energy,” Carrig told Lake Tahoe News by phone.

He added the “juice of the business” in building chairlifts and the “energy of putting out great products.”

Waxing poetic, the Boulder resident talks about skiing as if it transcends itself. “I now love to ski the groomers as much as the moguls,” Carrig said. “And I still love steep, deep powder.”

Carrig is a beautiful skier.

“It’s incredibly compelling to be outside in the mountains. It strikes a sense of awe – to move against gravity is as close to flying as you can get,” Carrig said.

It’s the spirituality of “being in the mountains” that fills him most. “Especially Heavenly, it’s an incredibly spiritual place. To see that lake,” he said in the awe most avid Tahoe recreationalists have shared through the years.

That stark contrast of white to blue resembles a painting. That is a hobby Carrig plans to do more of in retirement, along with traveling, skiing, paddleboarding and cycling – as well as taking an excursion to Italy. In the winter, he’d like to visit various ski areas with no job to do.

When Carrig was the Heavenly chief from 2002-10, he would often get out of the office and go out on a ski to check on how his workers and the conditions were holding up. His tenure at Heavenly became one in which customer service, above all, took precedence.

Carrig started out at Sugarbush in Vermont as a ski patroller – with no notion of a ski career.

“When I started, I just wanted to pay rent and buy beer. I thought: ‘Wow, they’re paying me to ski’,” he quipped, further identifying with the ski bum label. “It’s been a great career.”

He left Sugarbush in 1997 and hasn’t returned to ski there since. In that time the ski industry has changed immensely.

“I think definitely there was a period of time when it became much more of a business. Back then you worked for the guy who founded the ski area. Now it’s more polished, more service. The ski vacation involves good lodging, good dining,” he explained.

With climate change being on the forefront of how the ski areas deal with a lack of snow, Carrig nonetheless sees a silver lining.

“I think climate change for sure has made the weather more erratic with storms more extreme. But there’s still skiing between Thanksgiving to Easter,” he said, pointing to snowmaking as having a huge impact on the survival of Western resorts such as Heavenly and Northstar. In Colorado the natural snow still “carries the day.”

He sees the industry’s future as bright.

He mentioned the evolution of ski technology as contributing to skiing’s steady market at least for the large Baby Boomer demographic. Think shaped, fatty and twin tip skis.

“One of the biggest things I’ve seen a change in is the grooming. It’s nothing like the ’70s. Now we have these high-end tillers that allow Baby Boomers to ski longer,” he said. The new grooming machines make the ski experience smoother and easier on the joints.

It appears Carrig’s careful observations will eventually be missed by those he dealt with at Vail Resorts.

CEO Rob Katz commended Carrig’s vision in the Denver Business Journal but admitted he “will miss his engagement as president.” Katz further expressed relief Carrig would at least stay on for a few years as a senior advisor.

One of Carrig’s closest peers also gave him a nod of appreciation.

“I think he’s had one of the most impressive careers in the ski industry. He’s been a key leader in the transformation of our company,” said Bill Rock, who’s undergoing a change himself. The former head of Northstar went to Utah this fall to run the newly acquired Park City Mountain Resort.

Rock identified the safety and service programs, along with key capital projects, as noteworthy initiatives Carrig has spearheaded for Vail. Carrig and Rock teamed up to advance the $30 million capital improvement program at Northstar in 2011.

“(It) allowed me to see his experience and insight in action, and it was fun to work with him directly on something so big,” Rock told Lake Tahoe News.

But all work and no play? After all, it is a recreation business.

“My favorite memories of working with Blaise are any time I got the chance to ski with him. I always learned something, and it’s amazing to see his incredible passion, experience and love for the business come through,” Rock said.