PLACERVILLE – Plans to build a spacious new El Dorado County courthouse in Placerville by fall 2020 are moving forward, but not without allegations of backdoor politics, favoritism and manipulation of the system for personal financial gain.

On Nov. 6, the Judicial Council had a public meeting in Placerville to explain the draft environmental impact report.

Laura Sainz with Environmental Compliance and Sustainability, Office of Real Estate and Facilities Management explained the areas in which significant environmental issues were found, including aesthetics, noise, biological and cultural resources and transportation and circulation, and how these would be mitigated to “less than significant.”

The sparsely attended meeting was composed mainly of government agency representatives, but local resident Lisa Johnson expressed the sentiments of some residents living nearby the project.

“I just recently purchased my home here because of the rural quality of life. Why was this project not disclosed to me at that time? There is only one road in and out of where I live onto Forni (Road),” she said.

She was also concerned about years of potential construction noise.

“I hear the (El Dorado County) fairgrounds like they’re in my backyard. And this will be on my side (of Highway 50),” Johnson said.

Sainz responded that no project has formally been approved yet, so notification was not possible.

John Koster, project manager with the Office of Court Construction and Management, noted that the quietest construction techniques would be used; hopefully without any blasting or pile driving, and that the first six months of construction will be the noisiest.

An additional concern is the fate of the historic Main Street courthouse once operations cease there. In a 2012 letter, Placerville resident Kathleen Newell noted the “adverse economic effects on Historic Downtown Placerville after the courthouse is moved to another location. Specifically with the issue of creating a blighted Main Street due to businesses vacating downtown and relocating closer to the new site.”

The courthouse is more than 100 years old and appears eligible for listing in the California Register, making it an “historical resource.” In September, the city and county agreed to the formation of a Blue Ribbon committee of city and county stakeholders to explore potential reuses of the Main Street courthouse. 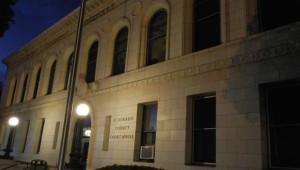 The Placerville courthouse project has been in the planning stages since 2008. It will be funded and managed by the state, not the county, as the courts are a separate branch of government, independent of the county’ administrative structure. This funding is not from the state’s General Fund, but from statewide increases in court user fees authorized in 2008 by Senate Bill 1407. The Administrative Office of the Courts (AOC), the staff agency of the Judicial Council of California, is responsible for site acquisition, design and construction of this and other critical-need courthouse projects throughout California.

Severe cuts to the judicial branch’s budget in 2011-12 delayed funding for the project, but in February 2013 the Court Facilities Working Group recommended the Judicial Council proceed with funding this and other high priority courthouse projects. The 88,000-square-foot facility would be located on property owned by El Dorado County adjacent to the existing county jail just off Forni Road in Placerville. It would also require purchase by the county of 5.2 acres from an adjoining parcel owned by John Briggs, father of El Dorado County Supervisor Ron Briggs, grandfather of Placerville Planning Commissioner Brian Briggs and father-in-law of Superior Court Judge Steve Bailey. The county entered into an Option Agreement with the Briggs Family Trust for this purchase in 2012. It was extended once and now expires on Dec. 18.

Some claim this is more than a happy coincidence for the Briggs family.

Currently, Superior Court services are divided between two locations — the historic Placerville Courthouse on Main Street that was built in 1913, and a portion of Building C in the county Government Center. Both buildings fail to meet current standards for security and other services. The project would consolidate operations in one secure facility capable of handling all case types, providing secure parking for judges as well as 240 on-site parking spaces for staff, visitors and jurors.

The technical part of this process is straightforward. In March 2011, the state Public Works board approved the selection of a potential courthouse site. The Judicial Council, the policymaking body of the California courts and the lead agency for the project, circulated a notice of preparation of a draft environmental impact report in April 2012. The California Environmental Quality Act (CEQA) requires lead agencies for projects to consider potential environmental impacts, determine if any are significant, and propose mitigation measures for those impacts.

The DEIR was prepared, and a 45-day circulation period, during which agencies and individuals can comment on the report ends Dec. 1.

The issues not addressed at last week’s meeting are the allegations that this was not necessarily the best or only site and its selection is tinged with political cronyism. El Dorado County Taypayers Group sent a letter to the Judicial Council in July 2013, pointing to, “the local corruption going on regarding the proposed new court house project in Placerville,” and asking that the state not fund the site. The letter alleges Supervisor Briggs had been pushing this site selection behind the scenes for his family’s gain.

The letter says, “The remaining six project parcels and other nearby abutting parcels are held in Ron Briggs and his son’s name will not be required to pay for their normal proportional and equitable share of reimbursement of the heavy master infrastructure improvement costs and off-site improvements ….”

In September 2013, Curt Child, chief operating officer of the Judicial Council, sent a letter to the El Dorado County Board of Supervisors and then El Dorado County Counsel Ed Knapp stating the Taxpayer’s Group’s concerns warranted treatment of the site as “controversial,” and requested a response from the county explaining “what action the Board will take to address these concerns.”

In a January letter to Presiding Superior Court Judge Suzanne Kingsbury, Steven Jahr, administrative director of the courts, indicated that El Dorado County counsel had “provided written documentation to address the concerns raised by the Taxpayers Group,” concluding that the site was no longer considered controversial and the project would continue. Lake Tahoe News was unable to obtain a copy of that documentation.

After the DEIR comment period ends Dec. 1, the Judicial Council will prepare written responses to all comments received, circulate the report for 10 days and then decide whether to certify it. Once it’s certified, El Dorado County would likely purchase the private parcel from the Briggs Family Trust, and the Judicial Council would then purchase the entire project site from the county. Bids for construction and other project services would then begin, with estimated completion now set for fall 2020.