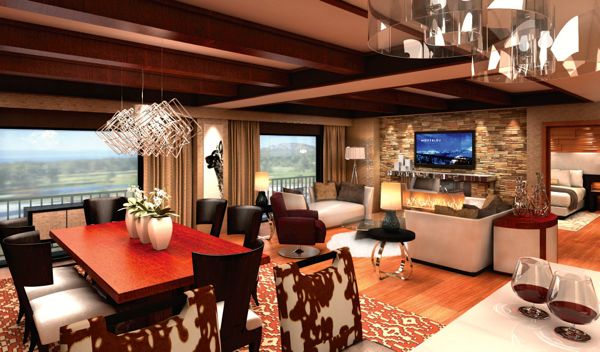 Even though MontBleu has been around for more than nine years, remnants of when the hotel-casino was Caesars Tahoe still exist. But those are all about to disappear with a $24 million remodel of the Stateline property.

“The rooms have not been touched since the Caesars days. It was the mid- to late-’90s since anyone did anything to the rooms. Some of the rooms have Caesars’ logos in them,” General Manager Steve Ditchkus told Lake Tahoe News.

Each of the 401 rooms, plus the 36 suites, is practically being gutted. A Tahoe-esque feel is being incorporated with all of the wood that is being used, along with neutral colors.

For a society that needs to be plugged in even on vacation, the rooms will be wired with multiple outlets.

Flat screen TVs are being added. The headboards, nightstands and other furniture are new.

Bathrooms are also getting a much-needed overhaul, with such improvements as walk-in showers. New vanities and fixtures are coming.

Mountain modern is the overall theme. 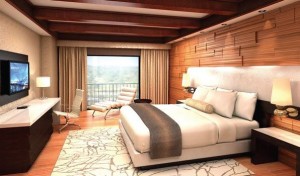 Gone are all references to Caesars Tahoe.

Ditchkus said the price of rooms will go up, but how much has not been decided. That’s one of the things he plans to discuss with his bosses when he’s in Las Vegas this week.

The remodel is designed to cater to what Ditchkus calls their demographic – “the avid gambler from the Bay Area.” This is why the 45,000-square-foot casino floor and showroom are also getting a face-lift.

While carpet was laid when the property changed hands, it is time to be replaced. Ditchkus calls the new carpet, which is in, “elegant”.

Several televisions will be added to the box office.

The showroom – which has Caesars pillars – will get new carpet and tables. The bars are going to be revamped so they are easier to access.

“It will have a new look and a new feel,” Ditchkus said. The showroom should be done by Christmas.

The sports book is going to move to the Zone Bar side, with the bar being redone. Outside upgrades are also in the works, including painting the building, redoing the parking lot and porte cochere.

MontBleu, while it has had outdoor concerts in recent summers, is staying away from that concept and instead is letting Harveys and the future Hard Rock capture that market. Outdoor festivals like this year’s craft beer and crawfish events are what MontBleu plans to do more of.

No changes are planned for the restaurants.

MontBleu is an Edgewood Companies property. The lease with Las Vegas-based Tropicana Entertainment, which operates the hotel-casino, expires in 2028. Ditchkus said it is too soon to know what will happen when that date arrives, but added negotiations are always ongoing with the landlords.