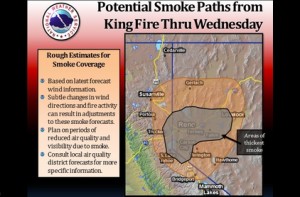 The number of structures lost in the King Fire is now at 12. One other sustained damage, while another 57 outbuildings are gone.

A red flag warning is in effect until Sept. 24 at 8pm. This means high winds and low relative humidity.

The fire is 35 percent contained, with 89,574 acres burned. Most of that is in the Eldorado National Forest east of Pollock Pines, though it has spread to the Tahoe National Forest in Placer County.

Residents of the White Meadows area could return to their homes on Tuesday. This is where the houses were destroyed. The road closure at Ice House Road and Highway 50 is still in effect. However, affected residents will be allowed through to White Meadows.

Crews are building direct lines where they can, and indirect lines where unsafe conditions exist. A spot fire on the east side of French Meadow Reservoir, north of the leading fire edge, is close to full containment. Two heavy helicopters began making water drops on the spot fire in the late Monday afternoon. There is the potential for extreme fire behavior if the winds, fuels, and topography come into alignment, officials said. The greatest threat is to the northwest end of the fire.

Officials believe the fire was started by an arsonist Sept. 13.

Nearly 2,000 people are still prohibited from returning to their homes. The Camino Seventh-day Adventist Church remains the evacuation center. The Red Cross is opening a service center at the Church of Our Saviour, 2979 Coloma St. in Placerville where case workers starting Tuesday from 10am-6pm will distribute supplies to people who have been displaced. This, though, is not an overnight shelter.

The Tahoe National Forest has established a call center from 7am-7pm at the Truckee Ranger District Office to provide residents of Truckee and Lake Tahoe Basin with clear and accurate information on the King Fire. The number is 530.587.9096.

“Since the King Fire started, we’ve seen false rumors and misinformation spread in the community and having deleterious effects,” Joanne Roubique, Truckee district ranger, said in a statement.

More than 7,000 people are fighting the fire, including firefighters from Lake Tahoe.

Westbound Highway 50 remains one lane from Riverton to Pollock Pines.

The Placer County Board of Supervisors received an update today on the King Fire.

This is a video published with permission from Matt and Michaela Johnson of MJ Photo Co.: