An arrest has been made in the out-of-control King Fire near Pollock Pines.

Wayne Allen Huntsman, 37, was arrested Sept. 17 on a charge of arson – forestland. His bail was set at $10 million. 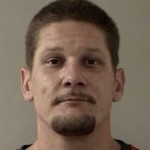 The King Fire erupted Sept 13 and has since burned 73,184 acres and is 10 percent contained.

A criminal complaint was filed by the El Dorado County District Attorney’s Office on Sept. 18 alleging Huntsman “willfully and maliciously set fire to and burn, and caused to be burned forest land” in what is now known as the King Fire. Aggravating factors have been added because two people fighting the fire have been injured.

Huntsman has a criminal past. In Santa Cruz County he has been convicted of assault with a deadly weapon and in Plumas County on property theft charges.

He is scheduled to be arraigned Sept. 19 at 1pm in Placerville.

How the fire was started has not been released. 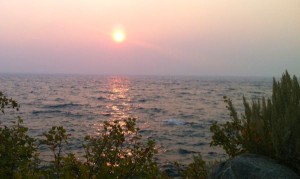 Smoke from the King Fire makes for a colorful sunset at Cave Rock. Photo/Susan Wood

“The fire is a not a threat to the basin at this time,” Dave Zaski with North Tahoe Fire told Lake Tahoe News Thursday afternoon. There are also no evacuations in the basin. And Truckee is also not threatened.

The terrain that ignited last night was heavily wooded, whereas the areas close to Alpine Meadows and Squaw Valley are full of granite.

“We are telling people to have an evacuation plan ready. If something goes bad, we will tell them,” Zaski said.

Winds are also expected to decrease and the humidity level should be good for fighting the fire this evening.

The fire is moving east toward Desolation Wilderness. It has moved into Placer County. As of Thursday morning it was almost at Hell Hole Reservoir. The U.S. Forest Service has issued an advisory for people to not hike or backpack in Desolation and Granite Chief wilderness areas. The McKinney Rubicon Trail has been closed. A closure notice has been issued for Eldorado National Forest until the fire is out.

While no structures have been lost as of Sept. 18, thousands of residents are temporarily displaced as fire threatens them. As of Thursday night, 12,000 single residences and 9,000 other minor structures are in the path of the fire.

Because of evacuations advised for the areas of Kyburz and Silver Fork, Silver Fork Elementary School will be closed Sept. 19.

Highway 50 is closed from Pollock Pines to Riverton. For updates from Caltrans, click on the state icon on the home page of Lake Tahoe News. 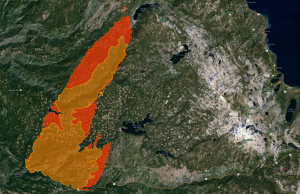 The fire is moving north from Pollock Pines into popular wilderness areas. Hell Hole Reservoir is at the top, then Loon Lake to the right, and Union Valley Reservoir near the center. Map/Google Images

On Wednesday, Gov. Jerry Brown issued an emergency proclamation for El Dorado and Siskiyou counties because of the King and Boles fires. The Boles Fire is the one that swept through the town of Weed and continues to burn.

Smoke is expected to continue to be a problem for Truckee, Carson City and Reno areas. Washoe County is reporting unhealthy air quality and recommending people not go outside, especially people with respiratory issues, older people and the very young.

The Ironman race on the North Shore this weekend is still scheduled. The air show at Lake Tahoe Airport on the South Shore is also still happening, only now the admission is free.

Nearly 3,700 people are working the King Fire with 327 engines, 15 helicopters, 49 dozers and 80 water tenders. Crews from Lake Tahoe are at the fire.

Officials say it is costing $5 million a day to fight the fire.