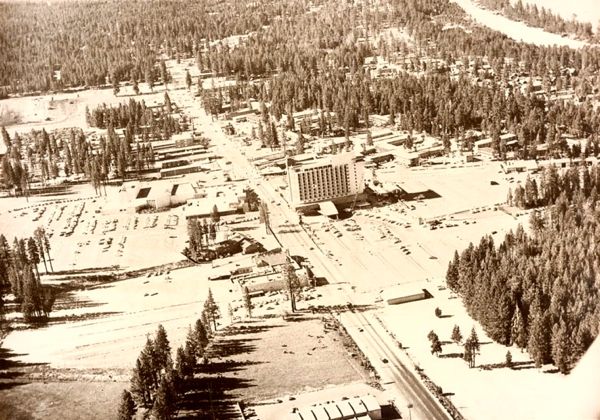 An aerial view of Stateline in 1962. Photo/UNR Special Collections Department

The early aerial photo, above, was taken over the Nevada side of Stateline circa 1962 shows South Shore’s first high-rise hotel just finishing construction at Harveys. Across the street (left) from Harveys is Barney’s Casino (opened in 1961) and Tahoe Harrah’s (now Harrah’s Tahoe). The empty area in the upper left on the California side was becoming the Crescent V Center, including Raley’s and Lawrence’s Department Store. 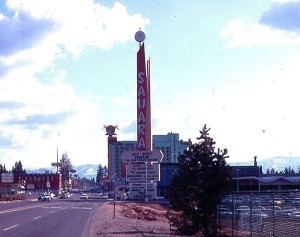 About 1972, the left side of Highway 50 included First National Bank of Nevada, Barney’s Casino, and Harrah’s. The lake side of the highway had Harvey’s and the Sahara Tahoe, which opened in 1965. Entertainers listed on the Sahara sign include Jack Benny, singer Rouvaun, The June Taylor Dancers, The Modernaires, The Original Caste, Buckley & Collins, and musician Page Cavanaugh. Behind the camera and near Kingsbury, the new Harvey’s Inn was under construction. In 1973, it burned to the ground the day before its opening. It is now the Lakeside Inn and Casino.

Today’s view is from the same position as the 1972 photo. MontBleu has replaced the bank, multiple businesses have replaced Barney’s, and all the casinos now have hotels.