Lake Tahoe Airport will not have commercial service – at least for the indefinite future.

That was the unanimous decision of the South Lake Tahoe City Council on Aug. 5.

Michael Hotaling, the consultant putting the airport master plan together, essentially gave the council an ultimatum – commercial or general aviation airport? This is so his people can be more focused in their approach as they put together the document.

South Lake Tahoe has not had commercial air service since 2000. 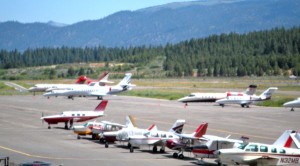 Planes of all sizes use Lake Tahoe Airport. Photo/LTN file

Hotaling made a case for how difficult it would be for this airport to attract commercial service again. The industry isn’t what it was. Airlines have been consolidated. They are all about having planes at least 85 percent full because it isn’t until they are at 75 percent capacity that they make a profit.

He pointed out that an airport like Mammoth could attract commercial service because of a $2 million annual subsidy, as well as Los Angeles International Airport being several hours away.

Lake Tahoe is an hour from the Reno airport. And as Pat Ronan, owner of Lakeshore Lodge and Spa, said, when Interstate 580 in Nevada extends farther into Carson City, it will cut another 10 minutes off the drive between Reno and South Lake Tahoe. Driving less than hour is a psychological threshold, he implied.

Three people spoke at Tuesday’s council meeting in regards to the airport. All favor the focus being on general aviation.

But this does not mean big planes won’t fly into the airport. The airport still has FAA clearance for large planes like a 737 to land. It could also mean a Gulf Stream V landing.

Planes of significant size are a regular sight during the American Century Championship golf tournament.

And these days it’s not unusual for people to have fractional ownership of sizeable aircraft. And the GA designation does not stop commuter flights.

Keeping the 139 certificate from the FAA will allow flexibility for the airport. While it costs the city $75,000 a year to comply with the 139 regulations, it potentially pays for itself because there are pilots who won’t land without that designation. And with it, it could be easier for the airport to contemplate commercial service in the future.

But Hotaling explained how the narrowness of the runways could present a future conundrum if the city were to try to attract commercial service. There isn’t the width needed per FAA standards. And to create it would potentially be an environmental nightmare.

An issue raised at many meetings about the airport is whether it is a financial burden or benefit. Hotaling recommended the city do an economic study to find the answer. The council agreed to do just that.