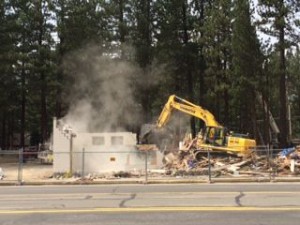 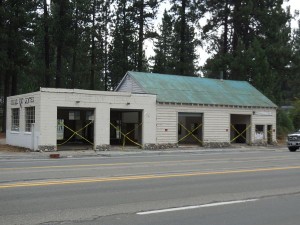 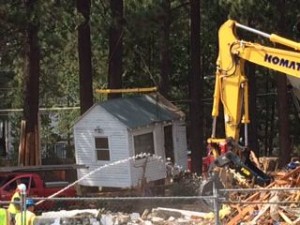 The old cabin is being relocated. Photo/Dave Kurtzman

The brick-and-frame building was taken down Aug. 6. It will be replaced by an Auto Zone store.

Longtime local Dave Wakeman remembers that the late-Melvin “Buzz” Springmeyer, a World War II fighter pilot, operated his garage and International trucks dealership there from the late 1940s into the 1970s.

Springmeyer and bride, Marjorie, lived in the quaint cottage directly behind it. It was cut in two, but put back together and hauled off-site.

At the right end of the garage was Springmeyer’s service station with two gasoline pumps. This was before Highway 50 was widened in 1957.

A former local business, Harrison Radiator Works, had no building but instead operated on wheels. It regularly parked between Buzz’s garage and the little cottage in back.