STATELINE – When the emergency happens it’s too late to think about what to take. That’s why it is necessary to have papers in place, an emergency kit packed and a rendezvous spot selected now – not later.

Leona Allen with Lake Valley Fire Protection District and Niki Congero with Lake Tahoe Humane Society last week dispersed a wealth of information and tips about what people should do for themselves and their pets.

Allen brought a suitcase to the Soroptimist International South Lake Tahoe meeting at Harrah’s Lake Tahoe. It wasn’t because she was staying the night. The contents are what will get her through a few days if she were evacuated. 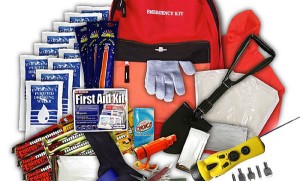 First aid and larger emergency kits should be tailored to an individual or family’s specific needs.

And she knows all about being displaced. She and her husband lost their house in the 2007 Angora Fire.

“If you are not prepared to evacuate, you won’t come away with a lot of stuff,” Allen said.

She knows of people who showed up at a Red Cross shelter with the TV remote. During Angora one young person thought taking her dad’s prized elk that was in freezer was the most important thing. It ended up spoiling when the electricity went out at the house she took it to.

Allen said people have become complacent in the last seven years. And the rains of late also wrongly convince people the threat of fire has lessened. All that water just makes fire fuels grow.

Cell phones likely won’t work. How will you connect with loved ones? If your normal route out of town or to a friend’s house for shelter is blocked, what is Plan B? Do you know how to turn the electricity off?

Those are some the questions to answer now, not during an emergency.

Shutting windows and doors before leaving is imperative because embers can blow in and start a fire from the inside out.

Write a sign now on bright poster board that says “Home Evacuated” and then post it in a visible place outside before you leave. This saves first responders time as they go door-to-door to make sure everyone is out.

“Don’t turn the sprinkler system on the roof. It only takes away water pressure. That happened during Angora,” Allen said.

In Allen’s emergency bag she has a sleeping bag, dehydrated food she would use backpacking, water (that she changes every few months), towels, bandana (this helps with smoke, but don’t wet it because it could cause burns in the heat of a fire), first aid kit, can opener, box of disposable gloves, plastic bags, cell phone charger, flashlight, radio, note pad/pen (her dad kept a journal during Angora that proved invaluable when dealing with the insurance company), address book with phone numbers, maps and a knife.

Also in the kit is a computer disc with pictures of every room in the house, all of their insurance information, bank info, copies of utility bills, deed to the house, and vehicle registration.

“After the Angora Fire, this was priceless,” Allen said of the disc. She said to include anything on it that you think will help in the recovery process.

On top of the kit, have a list of things to grab at the last minute – money, credit cards, checkbook, and whatever else you might immediately need.

She said fireproof safes turned out not to work during Angora. Some people recovered melted jewelry, while others returned to charred cash. Bank safe deposit boxes are a good alternative. And during the Tahoe fire Tuff Sheds endured the wrath of fire and heat.

When it comes to pets, Congero recommends having a supply of food and water for 48 hours. They should have their own kit that includes food and water, stainless steel bowls (so they don’t melt), tags, medication, a carrier, collars, harness, leash, litter box, cleaner, paper towels, tub of Lysol wipes, first aid kit for animals, gauze wrap, and proof of vaccinations.

Post-Hurricane Katrina a law was created mandating communities set up shelters for animals if they want to receive federal dollars. Shelters must also be where their people are. And Congero said bring your pet’s favorite toy or blanket to the shelter, because they, too, get stressed.

The local Humane Society is prepared with two trailers full of kennels, running water and a vet ready if need be. They are ready for large animals, too. And they have aquariums for fish and could handle birds.

She said if for some reason you can’t take your pets, don’t tie them up. Leave them in the house. Fill the tub with water, put the toilet seats up and shut the dog/cat doors.