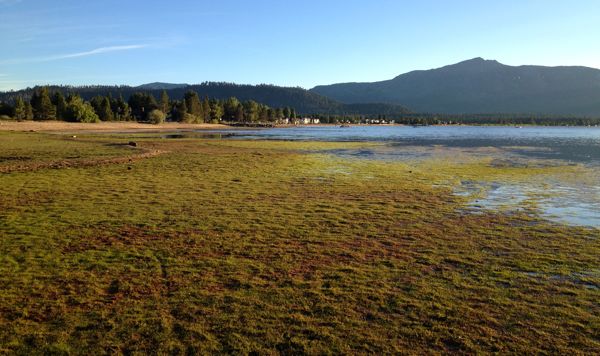 Normally this area at Cove East in South Lake Tahoe is under water. The beach is toward the upper left corner. Photos/Kathryn Reed

With a mere 3 inches of snowmelt adding to the level of Lake Tahoe this year, the dire trickle-down effect of the drought on recreational outlets like Lake Tahoe Balloons has not been overinflated.

By the time the anticipated lake level for Tahoe reaches its natural rim of 6,223 feet by mid-October, businesses and agencies tied to the fun and the sun may see more severe conditions than what is being witnessed now from shore-to-shore.

To many who follow the trends, there’s nothing normal about the weather patterns. And this includes the lake’s experiencing more abnormal monsoonal weather conditions that reduce evaporation and provide heavy downpours. The positive of the whacky weather is that it delayed the lake’s hitting the natural rim.

“I used to be able to get right up there close to shore. Now I have to be a quarter mile out. That makes it difficult,” Harley Hoy of Lake Tahoe Balloons told Lake Tahoe News.

For many years, Hoy has run his company out of the Tahoe Keys Marina. But he may be forced to move if the lake level keeps sinking and the marina operators fail to live up to their pledge of dredging the boat channel. It’s been a tricky situation for boats getting in and out of the popular South Shore marina, and it’s only getting worse.

Hoy said he was told the dredging would occur this summer. Now he’s heard October, and that may be too late for his business. He’s sought another place to run the company.

“If the guy would have the common courtesy, he would see that one day there could be in an accident and someone will find him negligent,” Hoy said of marina General Manager Robert Spinnato, who did not return Lake Tahoe News’ phone calls. Hoy cited the removal of lights once placed outside the channel that have made conditions hazardous going into the Keys.

Paddlers have more area to maneuver because motorboats can’t get close to shore without serious consequences.

Between the sand washing out and the rocks exposing themselves in Lake Tahoe, concerns have been rising for the U.S. Coast Guard. The federal agency, which has a station in Tahoe City, was forced to send a crew out to help with an unprecedented call to rescue more than 200 passengers on board the Tahoe Queen paddle-wheeler because it was stuck on a sandbar off shore.

“It’s been awhile since we’ve had any commercial incident like this,” Coast Guard Officer in Charge Daniel Polhemus said.

The matter is under investigation.

“The lake continues to go down, and boaters may not realize how the low lake level is creating hazards. Boulders normally covered up by 5 feet of water are now exposed. It’s a dangerous situation for (those at) marinas not familiar with the drought effects,” Polhemus told Lake Tahoe News.

Sand Harbor, Kings Beach and Camp Richardson have joined the list of closed marinas with El Dorado Beach, which often closes to motor boat traffic. The upside is human-powered vessels such as paddleboards have easier access to the water.

Polhemus described Cave Rock, one of the more promising launching spots, as “extremely dangerous” without local knowledge of the terrain. The Tahoe Keys Marina is characterized “very, very shallow,” while Ski Run Marina – home of the Queen – is considered iffy to negotiate around.

In the Coast Guard’s home-base of Tahoe City, Polhemus has seen owners paddling their boats out as a safer alternative to dealing with bringing the motors down in shallow water.

The Coast Guard warns boaters about driving their trailers down too far on the ramps and urges boat captains to slow down considerably.

“We’re asking people to be extra careful,” Tahoe City Marina Manager Jim Phelan said, adding he’s noticed some boaters have lost use of slips. Some sailboats have experienced more challenges than usual because they can’t use rudders in shallow water. Phelan expects more limitations as the lake nears its natural rim.

“Under normal conditions, we would have hit the rim in a few weeks,” federal water master Chad Blanchard told Lake Tahoe News.

But the downpours and cloud cover from the strange July and first part of August have been “extremely helpful” in slowing the process, he added.

It’s like the summer is struggling with occasional tropical storms to make up for three years of drought given last year’s lackluster winter and dismal snowmelt runoff. In 2012 during the period starting in April, Lake Tahoe rose 7.68 inches. The following year was worse with 5.76 inches. This year marks the fourth worst lake level runoff in 114 years with only 3.48 inches.

This trend has culminated into how more than 80 percent of California continues to suffer extreme drought conditions.

The consequences are far-reaching and dire to some who rely on the health of the environment. Moreover, the concerns have not been limited to those doing business at the lake.

Victor Babbitt of Tahoe Fly Fishing applauds the recent storms that have cooled things off in the waterways based on how fish behave.

“Every time we have a thunder shower, it helps in a huge way,” he said.

Babbitt has been worried about the fish going into shock when the water is too shallow and warm. Catch-and-release fishing in times of elevated temperatures may increase stress and hinder survival of fish populations. Avoiding 70-degree water holes is the key.

“The fish try to move to different parts of the river,” he said.

But they could run out of places to go – especially in the Truckee River that feeds from Lake Tahoe.

Rafting companies normally fill this expanse of the Truckee River by the River Ranch.

Commercial rafting ran out of water

As of July 24, the Truckee River rafting companies that usually do a banner business in August stopped operating because of the water level. Water officials have been forced to accommodate the lake instead.

Although concessions were made in early spring to give Aaron Rudnick with Truckee River Raft Co. a head start on renting boats, it didn’t help much because the tourists weren’t in the region then like they are now.

The low water level has made conditions dangerous with many rocks exposed like the ones in the rapid called “the pit” near the River Ranch.

The rafting company usually makes up to 40 percent of its revenue in August.

“This is huge. Every weekday in August is like a weekend day, and every weekend day is like the Fourth of July,” Rudnick lamented to Lake Tahoe News. “You miss out on all that.”

Rob Curtis, the general manager at the River Ranch, found it necessary to be creative with making up for at least 60 percent of lost revenue from rafters frequenting the inn located at the end of the rafting companies’ river run. The usual 1,000 lunches served on the deck on most weekend days have been cut in half, prompting the small, boutique hotel to implement the “no rafting event series.” One example is a crawdad festival designed to draw the masses.

When the rafting companies cease operating, the effects span other areas of responsibility.

The two companies located at the heart of Tahoe City clean up the trash in the river – but this requires they run their rafts. Placer County had to step in to establish a partnership with the Tahoe City Public Utility District and the U.S. Forest Service to do the cleanup, especially considering individual raft runners on bottomless inner tubes may have the tendency to dump more in the river, Rudnick pointed out.

“We needed to deal with this because it could be a problem,” Placer County Supervisor Jennifer Montgomery said.

Montgomery added that local government has taken extra steps in conserving water including the turning off of water features and fountains. She estimated Placer County has saved about 15 percent of its water consumption in doing so.

From government to industry, most entities dealing with recreation are watching their water use.

Lake Tahoe Golf Course has cut its water use in half, manager Joe Lockwood indicated. Its usual everyday, 11-minute sprinkler rotation is now down to 5 minutes every other day.

“Thankfully, our water comes from a well. And we hand water so that controls the amount of water better,” Lockwood said.

The same goes for Edgewood Tahoe Golf Course, as it was forced to buy water from its so-named Stateline-area water company.

South Lake Tahoe’s Bijou Golf Course is making sure it doesn’t over water.

The city also sweeps its pool patio at the recreation center, so no water is used to clean up debris, Recreation Manager Lauren Thomaselli pointed out.