Upward of 100 people congregated on Regan Beach on Tuesday evening for the South Lake Tahoe Parks and Recreation Commission’s workshop to help determine the future of this area.

“We can’t have a community project without community input,” said Parks and Recreation Commission Chairman Pete Fink as he opened the evening’s workshop.

Luckily, most of the attendees on Aug. 12 were practically bursting with input.

The crowd was promptly broken into groups, each led by a representative from either the commission or city staff. They were toured around the entire Regan Beach site as leaders pointed out areas of concern and encouraged residents to make suggestions, come up with new ideas and express opinions.

It is no surprise that more than one heated discussion ensued. It seemed few people agreed on anything.

One Al Tahoe resident suggested all parking be removed so the park is accessible only to those on foot or bicycle, coinciding with a citywide effort to become a more bikeable, walkable community. Others were adamant the free parking should remain for residents who don’t live nearby and so those with children or mobility issues can still easily access the park.

There was some talk of doing away with weddings at the beach, a service which brings in between $30,000 and $40,000 per year in rental fees according to Recreation Manager Lauren Thomaselli, but blocks off portions of the beach on most summer weekends. Others argued for it to stay, saying it was not only an important source of income to the city, but provided a place for residents and visitors alike to have an affordable wedding in Tahoe. 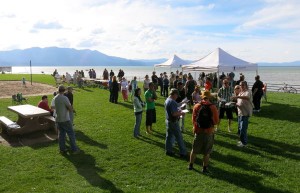 Some suggested Regan Beach should be restored to what it was in the 1950s, a sloped natural beach; others said that would result in too much erosion and all the sand being washed away. Lakeview Commons kept popping up as a point of comparison. Some people want to see Regan Beach more like its popular neighbor; some want it as different as possible.

One nearby homeowner would like to see Regan Beach remain virtually as it is now, except for maybe cutting all the trees down to improve views for adjacent homeowners.

Many of the attendees were residents or homeowners in the Al Tahoe neighborhood. This may explain why some of them seemed to have agendas to keep as many people out of the park as possible, pushing out groups, weddings, people with dogs and people with cars.

To one such comment a woman chimed in: “Everyone wants to be the last one in and shut the door behind them. Do you want to be a neighborhood or a bunch of Nazis?”

Through the many debates and discussions of the evening, two issues stood out as hot topics: legal enforcement and dogs.

Some residents pushed for stricter enforcement of just about everything: bigger fines for having dogs outside the dog area, fines for dogs pooping, fines for glass on the beach, for smoking, for drinking, for being there after hours, and more. Some were advocating hefty fines for these offenses, $200-$500, with a theory that if violators are fined, they will have more respect of the town and lake. Others just commented this could be a good revenue source for the city since they did away with the paid parking plan. 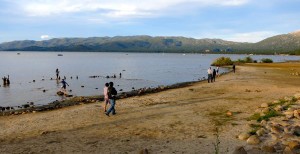 With Lake Tahoe so low, there is more to Regan Beach.

As for the dogs, part of Regan Beach is currently designated as a dog water park while dogs are prohibited on the rest of the beach. There is some signage alerting beach-goers of this policy, but it is minimal and dogs often end up in the dog-free zone. Clean-up baggies are provided at the entrance to the dog area, but not all dog owners are inclined to use them, resulting in unwanted dog waste lying about.

For some, the solution is to ban dogs entirely. Others would like the dog park to stay, but implement better signage and/or impose fines for violations. One attendee was adamant there should not be a dog park anywhere near the lake, submitting an article discussing the toxicity of dog feces for planners to review. Meanwhile, another resident suggested Regan Beach would be an ideal place to implement the Park Spark Project, installing devices which turn dog waste into energy to power things like street lights.

Organizers handed out 100 surveys and maps for attendees to fill out during the workshop. Questions included which neighborhood you live in, how often you visit the park, what amenities you think are important, what amenities you would like to see in the future and how often you would come if those things were implemented. People were encouraged to draw on the maps, indicating what changes they would like to see and where. Those who did not receive a map were asked to place sticky notes with suggestions on the big map displayed under the tent.

After the evening’s workshop, ideas for the future of Regan Beach appear to be all over the board. But one thing is for certain: the city and Parks and Recreation Commission have their work cut out for them in trying to come up with a plan which the community can agree on.

Tuesday’s workshop was just the beginning of a long process. City Manager Nancy Kerry said there will be plenty of public meetings and lots of planning to come. If things move quickly, construction could start as early as next year.

The last time Regan Beach saw a major overhaul was in the 1990s. Kerry said according to surveys conducted by the city over the last year, it is one of the top three public areas respondents would like to see improved, and thanks to some recent restructuring of debt she hopes to have between $1.5 million and $2 million to dedicate to the project.