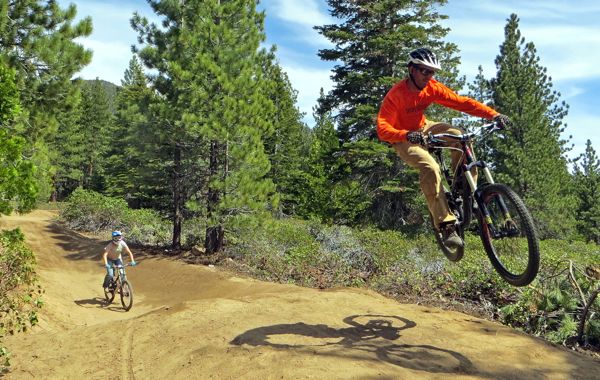 Mountain biking in Lake Tahoe is getting national recognition. Photo/TAMBA

It’s no secret that Lake Tahoe is an outdoor recreation destination. Skiers and snowboarders flock here in the winter, and visitors come to hike and play on the lake during the summer. The local economy depends on people coming here to play. However, one user group it seems Tahoe has yet to really capture is mountain bikers.

With more than 300 miles of mountain bike trails in the basin, there could be room enough for everyone. So the Tahoe Area Mountain Biking Association got together with Bike magazine in an effort to take steps toward bringing in more bikers.

Ben Fish, president of TAMBA, along with TAMBA member Paul Tolme, spent six months discussing and planning with Bike magazine Managing Editor Nicole Formosa the possibility of Bike doing a feature story on mountain biking in Lake Tahoe. Formosa finally made the trip to check out some trails in June.

Bike magazine is an international publication with more than 200,000 subscribers. They are known for their pages of stellar photography and focus more on where to ride than how to. Formosa said Bike tries to get to the “soul of the sport, the adventure of it” and looks for diversity in the destinations they feature. The magazine encourages readers to escape to places with beautiful scenery, a variety of trails and a location they can realistically travel to without it being too cost prohibitive. 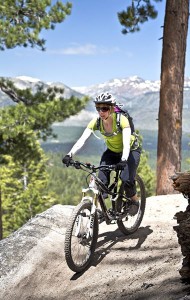 “Someplace you can go and be for a few days and just explore right from your door,” she told Lake Tahoe News, “and I think Tahoe has a lot of those things.”

Fish said he believes one of the reasons Tahoe has not yet sought out mountain bikers as a valid tourist group is a misconception that if they do come, they won’t spend any money. On the contrary he says, they will stay in hotels, eat at restaurants and spend money in the community just like skiers do. Bike magazine’s demographic research suggests he is right. Bike’s readers have an average annual household income of $100,000, more than half are willing to spend more than $2,000 on their next bike and 80 percent of them say they plan on taking a mountain bike trip in the next year.

Formosa said mountain bikers are just starting to be viewed as a valid user group that takes trips and spends money.

“We think if they know about it, they’ll come,” he said.

Formosa spent five days here in June riding and researching for the story. Fish, his wife, Amy, also a TAMBA board member, and other TAMBA members spent the week showing Formosa around and taking her on some of their favorite trails.

They rode the Tahoe Rim Trail from Mount Rose, then the Flume trail. They took her on Powerline and up Cold Creek to Star Lake and on the new Monument trail. They rode Armstrong Pass and the new and improved Corral just in time to catch the ribbon cutting ceremony on June 14, then later checked out Van Sickle trail, and, of course, Mr. Toad’s Wild Ride.

“She left exhausted and impressed. At least, that was my impression,” Tolme told Lake Tahoe News.

Some of the trails they rode are relatively new or recently improved. In fact, there is scarcely a trail in the basin which hasn’t been somewhat improved in the last 10 years. 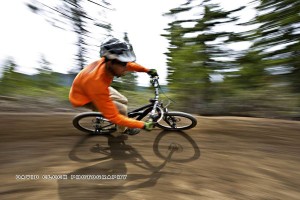 Features are being built into some of the Tahoe trails. Photo/Dave Clock

“[Tahoe] trails are amazing and the work that’s going on is really encouraging,” Formosa said. “Tahoe compared to other places has a really admirable partnership with the Forest Service. I haven’t seen that in a lot of places.”

The U.S. Forest Service was instrumental in helping with the construction and funding for the recent improvements on Corral and other area mountain bike trails. Fish said they have formed a great partnership with TAMBA in the last few years and are really beginning to understand mountain bikers as users of Forest Service lands.

One of Formosa’s favorite aspects of her visit to Tahoe was experiencing the community of mountain bikers here and the partnership they have formed with the Forest Service, something she hopes is indicative of the future of the sport. She also appreciated how they were able to start pedaling right at the Fish’s back door and within a couple hours be someplace that felt completely serene and remote.

Bike magazine has already posted one story from Formosa’s visit on their website. The full feature on Lake Tahoe will appear in print sometime next year.