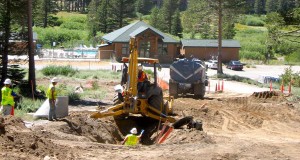 Kirkwood power house being built after the 2010 fire. Photo/Provided

Another federal loan will finalize Kirkwood’s push to be on the grid by Nov. 1.

The remote enclave off Highway 88 that borders El Dorado, Alpine and Amador counties has had a problem keeping the lights on and lifts spinning. There are about 700 mostly part-time residents in Kirkwood, with the ski resort being the main commercial entity.

The $8 million from the U.S. Department of Agriculture is in addition to the $50 million federal loan that was secured in 2012. The USDA is investing $263 million in projects in eight states to modernize electric systems. Kirkwood is the only California recipient of the cash.

Kirkwood Meadows Public Utility District, which in 2011 acquired Mountain Utilities, supplies the power to this resort area. KMPUD is separate from the ski resort, but supplies the electricity and water. The resort has been owned by Vail Resorts since February 2012.

Michael Sharp, general manager of KMPUD, was not available for comment.

What KMPUD will soon have is a 34.5-kilovolt power line that ties into PG&E lines. Much of it goes through U.S. Forest Service land.

Kathy Hardy, then forest supervisor for Eldorado National Forest, signed the record of decision in March 2012 allowing the project to go forward.

The line ties into a PG&E source at Salt Springs Reservoir in Amador County, then goes above ground for 3.1 miles to Bear River Reservoir. The Bear River to Kirkwood line will be underground. Two substations are part of the plans.

A bit of irony, though, is when the entire South Shore of Lake Tahoe was without power on Sunday Kirkwood’s lights were on.

Kirkwood had a powerhouse with six diesel generators that were sketchy at best. That facility burned to the ground New Year’s Day 2010, leaving people in the dark and without power for a couple days.

The powerhouse that was built after the fire will act as a backup once KMPUD is on the grid.