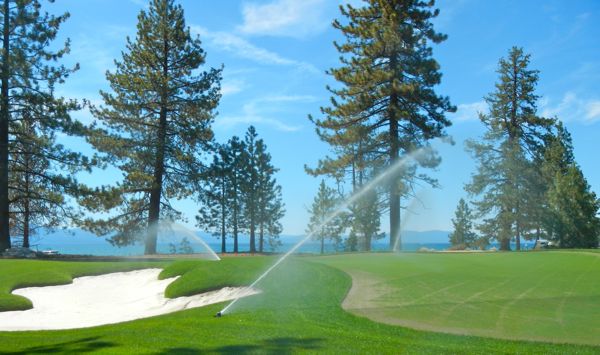 Edgewood Tahoe has been rethinking how it uses water. Photo/Kathryn Reed

STATELINE – It’s 7am Monday and there’s as much bustling around as a New York City subway station. But this is Edgewood Tahoe – home of the 25th American Century Championship golf tournament.

Work crews are not only busy preparing the grounds for the South Shore’s premier event of the summer, but golfers are getting in their tee times before some of the biggest names in athletic sports and entertainment take over.

Dan Zelhofer, who jokes by calling himself a “golf club relocation engineer,” whizzes up to the clubhouse with a list of 200 golfers wanting to take on the course. A normal day would be 130 people.

Unbeknownst to the golfers, a crew of up to 30 people has been out for hours to get the grounds in order – trimming, mowing, troubleshooting and checking the irrigation system in one of the West’s worst drought years.

It’s a challenge to the man who’s ultimately responsible for showcasing the 30-acre golf course.

“He’s probably one of the most important people at Edgewood now,” Zelhofer said of his colleague, Superintendent Brad Wunderlich. 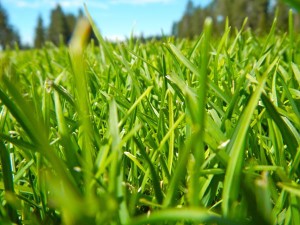 But Wunderlich welcomes the challenge. He’s a pro himself at what he does.

“Broken pipe” could be heard on his radio as he rode the cart around the course. He is very calm and trusts his crew knows what to do while he gives their suggestion the green light.

It’s Wunderlich’s second year working the ACC golf tourney, but he’s had much practice honing his craft to be on top of his game. The 33-year-old, who started at a golf course in St. Louis at age 15, majored in landscaping and horticulture at Colorado State University. He worked the Reno-Tahoe Open at Montreux in Reno for 11 years. The difference between that tournament and the ACC lies in the skill level of the players.

“On the PGA, they’re more focused on the green areas,” he said. “These guys (here) could hit it anywhere.”

It’s all in good fun. And the fans appreciate it – no matter what they have seen over the 24 years at Edgewood from the celebrities. One year, NBA great Charles Barkley laid down on the grass. On another, 49ers wide receiver Jerry Rice threw a football to the boaters anchored at the beach. And yet in another year, actor Kevin Costner failed to “remove the mechanism” and lost his focus as his ball rolled way under the rope and almost onto the walkway.

No matter where the ball lands, Wunderlich will be ready. Not even big-event pressure or hotel construction or Mother Nature could trip him up.

Beyond a milestone year for the championship, the drought has made Wunderlich think outside the box to keep the grounds up and presentable while being responsible with water. The foundation of this effort started in 2010 when Edgewood completed a $2 million overhaul of its 40-year-old irrigation system. The equipment and tools are kept in a 12,000-square-foot facility tucked in the trees behind the course.

“We do everything we can not to waste any water,” he said.

In addition, watering has been halted in the native grass areas and other sections considered not critical to the course.

In normal years, the Edgewood Lake fed by Edgewood Creek usually is enough of a water source to rely on for irrigation. This is not a normal year. 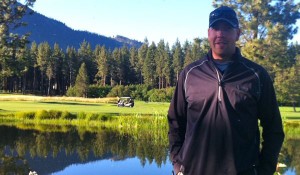 Brad Wunderlich is responsible for making sure Edgewood Tahoe is in pristine condition no matter what Mother Nature does. Photo/Susan Wood

“It’s pretty scary,” Wunderlich said, as he surveyed the water level of the dam bridging the lake and the creek. The watermark shows the level a foot below normal.

The golf course is buying water from Edgewood Water Company every day in the amount of what some families live on in Tahoe per month. This is only the third time in the history of Edgewood that the golf course has been forced to do so, he added.

With the drought turning everything brown early, Edgewood was forced to turn on the irrigation system in January, months ahead of schedule.

Water may stay in the line and therefore damage the pipes if they freeze.

To be on top of the situation, Edgewood installed a weather station between holes 2 and 3 that measures wind speed, humidity and calculates how much water the grass uses. The station is called E.T., which stands for evapo transpiration in landscaping talk.

“We use all the tools we can,” Wunderlich said.

Edgewood also seeded more this year – flinging 4 tons instead of its usual 3 to sustain its three types of grasses. Ironically, the Kentucky bluegrass is more tolerant of winter – a major consideration for these challenging mountain courses.

“You know, we spend all summer getting the course perfect before winter comes,” he said of the continuous cycle.

The job also requires a bit of a chemist’s flair to keep a course perfect in the mountains. Pine cones, needles and debris fall out of the sky and affect the acidity of the grass. The crews apply soil conditioners as well to balance the pH levels. Think of a swimming pool on steroids.

The work has to be completed in front of eager golfers. It gets more intense during tournament week, which started Tuesday. (The actual tournament is Friday-Sunday.) Crews have been mowing every day instead of the usual every other day. In the last few weeks, some workers like Wunderlich come in at 5am and leave at 9:30pm. They call it the dark-to-dark shift. 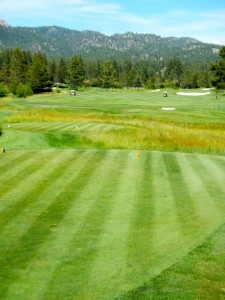 The hard work seems to pay off.

“The grounds are fantastic,” Keith Mirchan said. The New Jersey man had just finished playing with his 12-year-old son, Rohan, who plays in a PGA junior league back home.

His father came to play Edgewood Tahoe last year and prefers the grounds this year – despite hearing of the monumental drought year.

“I think they’re better this year. You would not even notice,” he said.

It’s comments such as this one that have brought pride to Wunderlich’s efforts.

And, it’s not too shabby when your work environment faces Lake Tahoe on one side and rolling green knolls on another. Wunderlich admits to having his dream job.

“Every day is different. You can get tunnel vision in what you’re doing. But when I look out on that beauty – I love being here,” he said.

Edgewood Tahoe management hopes visitors who want to stay over and soak up the beauty will have the same thought – especially with a 159-room hotel going in at Tahoe’s best parking lot view. Groundbreaking could start as early as August on the anticipated Edgewood Lodge. It’s due to be open in May 2016.

After the celebrity golf tournament, construction crews are coming in with the help of golf course workers to rebuild holes 8 and 9 on the far south side near Manzanita Street. A massive mound of dirt marks the prep for that effort. Wunderlich said hotel guests would use the same service road as those going to the clubhouse with a slight veering south.