A round of bloody Marys for the Reed clan in New York.

NEW YORK – Bloody Marys have long been part of my travel plans. It all started when my sister, Pam, and I missed a flight years ago when we were off to see our grandparents. We spent our “extra” time drinking a bloody Mary.

From that point on we found ourselves at an airport bar before each flight – coming and going. A bloody Mary is always the drink of choice.

Then we got our significant others involved in this ritual.

And now our mom is part of the tradition. Sometimes she gets hers without vodka, but that doesn’t matter.

So, when it came to planning our trip to New York, mom came across the ultimate in bloody Mary destinations – The King Cole Bar and Salon inside the St. Regis Hotel. It is the birthplace of the bloody Mary.

Many in our group of 12 who were in the Big Apple earlier this month for an early 80th birthday celebration for mom had a bloody Mary for lunch.

We had choices – Red Snapper, Bloody Smoke, Harry’s Texas Bloody Mary, Agave Maria and The Mary Terranean. Scotch, gin and tequila were in some of the concoctions instead of the traditional vodka.

Here is the history of the drink provided by the bar: “With the end of Prohibition in 1933, Fernand Petiot arrived from Harry’s New York Bar in Paris to preside over the St. Regis Hotel’s new King Cole Bar. The name came from Maxfield Parrish’s 15 foot long King Cole mural, and the combination of Parrish and Petiot quickly made the King Cole one of the liveliest places in a lively town. It became the regular haunt for a fabled coterie of wild and colorful characters, and Petiot began to serve them the drink that he called the Red Snapper – soon to be known the world over as the Bloody Mary.” 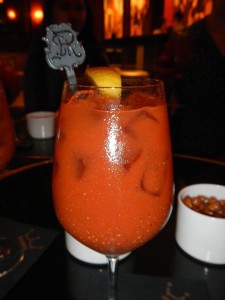 Shake well with ice and serve in a Delmonico glass.