Steven Gerling shrugs at the thought of being a role model to young children so early in life – age 16. He’s modest. He’s responsible. He’s sensitive. And he’s ahead of his time – for reasons that have made him grow beyond his years.

He’s lost four grandparents, all whom he was close to, in less than five years. With the first loss of his grandpa Jim in 2010 and grandma Mary in the same month of the following year (both on his father’s side), he ended up at Camp Sunrise with his siblings.

The free camp sponsored by Barton Home Health and Hospice is like no other. It’s set in the beauty of Glenbrook’s spiritual retreat Galilee every spring, a time of renewal. It’s specifically designed for ages 7 to 14.

Were there highs and lows? 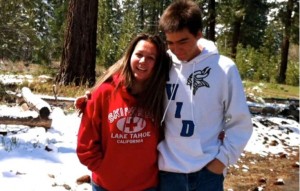 “My high was the whole experience – the fun activities, even the crying. It was a good thing to let it all out,” he told Lake Tahoe News. “There were no lows.”

To this day, tears well up when he thinks of the special relationships he had with his grandparents.

Regrets are few, but memorable, as is the case with most cases of grief. The teen had wished he had spent more time with his grandmother.

This is one example of the honesty that comes out at Camp Sunrise.

“My first thought was (my kids) don’t need this. How depressing. But then I thought they don’t necessarily want to talk to me about everything. They came back different, like they grew. It’s made our relationship stronger. We’ve always been one unit, but it does make you closer,” mom Melissa Barcus said of her four children — Steven, Jason, Michael and Sydney.

The family of five eats dinner together every night (with no cellular phones at the table), and they often go for walks after the meal. She specifically held back and let them approach her after the camp experience because she “didn’t want to invade their privacy.”

All of a sudden, the floodgates opened and the children opened up like never before.

“I think it’s one of the best things that’s happened to my kids,” she said.

Upon his return, Gerling gripped his mom a little tighter during their usual hugs.

The teen started out as a participant in 2010. He got so much out of it that he asked Barton camp organizer Tina Bruess how many years he could attend. When he maxed out at age 14, that didn’t stop him. He chose to volunteer last year. He’ll do the same for this year’s camp slated from June 13-15. And he’s still dealing with loss having lost two more grandparents in the last two years.

As anyone who has suffered from a loss of a loved one knows, you find kin in the fellowship of those who have experienced it. Children going through grief offer a different dimension of dealing with this life lesson.

“It’s especially hard for children. They know grandma and grandpa as big people. Then, their physical presence is very different,” Bruess said, while sitting to reminisce with Gerling and Barcus. “We let kids know it’s a safe place to cry, but they can always be a kid.”

One of Bruess’s fondest memories is how Gerling tucked in his little sister, Sydney, every night to check on her and give her a hug and a kiss.

Neither Bruess nor Barcus was surprised by the behavior.

“He knows what it feels like to have a loss and the younger kids feel like he’s cool and has made it through (the experience),” Bruess said, recalling how many of the younger children climbed all over Gerling for comfort and support.

“For Steven, it’s natural for him,” Barcus said, turning to her son. “You’re a protector.”

Such is the dynamic of the varied ages and roles at the camp. Parents join their children for part of the last day, after the participants have completed some heartfelt exercises on their own.

Gerling preferred the “memory” rocks the children placed in a labyrinth, a spiritual ring of hope. They also make “power sticks,” in which the children dress up a piece of wood with materials that symbolize the loss or a characteristic about the bereaved.

“Their power sticks are still hanging in their bedrooms,” Barcus said of her children’s receptiveness to the exercise.

Each year, Gerling’s power stick has a different look.

To that, Bruess indicated: “Grief evolves.”

No one knows better than the hospice services coordinator. She has staged many bereavement events and activities. This reporter participated in a moving tribute to a sister’s memory that Barton Hospice put on last Christmas season. The health care department also goes to South Tahoe High School to do focus groups on grief. Camp Sunrise is Barton Hospice’s premier event.