GARDNERVILLE – When California Chrome co-owner Steve Coburn told his wife, Carolyn, he was going to Sharkey’s Casino to bet on their winning thoroughbred to launch his march with destiny, she stood by her man – and her horse.

“I gave him the money to do it,” she told Lake Tahoe News of the undisclosed amount.

The Coburns, and hundreds of new friends, on May 28 were at the Carson Valley casino where they had placed that bet. They and their horse were bestowed with gifts, kudos and well wishes for another win in Elmont, N.Y., on June 7. 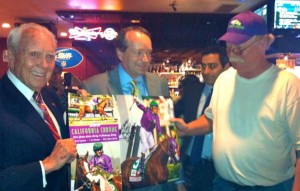 The chestnut colt won the Kentucky Derby on May 3 – against 200 to 1 odds. It was the first time in 52 years a California horse won the first jewel of the horse-racing industry’s Triple Crown. The horse continued its quest two weeks later and won the Preakness, along with the hearts and souls of many people who longed for a Cinderella story.

And that it is.

The prized horse only cost the Topaz Lake couple and co-owner Perry Martin of Yuba City $10,000. It has also brought redemption to 77-year-old trainer Art Sherman after a long Derby drought.

California Chrome – who gets his name from his white markings called “chrome” — also shares the same birthday with Steve Coburn’s late sister Brenda, who gets a prayer before every race. To this day, it’s difficult for Coburn to mention the connection without getting choked up, and Wednesday was no exception in his little hometown casino. The horse’s quest has also given jockey Victor Espinoza something for his brother, a former rider, to cheer about after a traumatic brain injury ended his career.

“Victor knows that horse. They understand each other,” Carolyn Coburn said, while sitting with family friend Teri Vandenberg at the casino bar. One could say the same about the Coburns, who have been married for 20 years.

“They are the most small-town, modest, humble people – so down to earth. They’ve been made celebrities overnight, and they’re overwhelmed,” Vandenberg said.

Carolyn and Steve Coburn on May 28 meeting hundreds of fans and signing  autographs at Sharkey’s in Gardnerville.

Despite the fame, Steve Coburn went back to work at a company in Gardnerville that makes magnetic strips for items such as credit cards. On Wednesday, he bellied up to the bar clad in blue jeans, a T-shirt and a cap for a swig of beer and to take time out from the hoopla. He was soon surrounded by patrons wanting a picture taken with him and an autograph. His wife quietly watched from a distance.

Unlike her more well known husband, the Coburn matriarch is soft spoken, but a powerhouse anchor for the family, which now includes a four-legged equine who aptly pays for his board and keep.

Despite the rural Nevada roots, Carolyn Coburn dressed the part of a racehorse owner at the Derby with a signature hat.

“At the winner’s circle, it blew off,” she said.

The Coburns and Martins co-owned California Chrome’s mother, Love the Chase, but she didn’t have the same love of running like her son. What both horses loved were cookies from Mrs. Pastures.

Most in attendance at the Sharkey’s ceremony and around the country say the same thing: “There’s something about that horse,” a thoroughbred that’s become a working-class hero when he beat the million-dollar babies in Louisville.

Back in Gardnerville, fans couldn’t be more pleased with seeing their connection to the horse – the Coburns.

“We’re honored the Coburns like Sharkey’s. This is such a Cinderella story,” Sharkey’s owner Harold Holder told Lake Tahoe News. He and the executives at the sportsbook company William Hill US stood out in their suits, but blended in with their enthusiasm.

Holder and William Hill CEO Joe Asher presented Coburn with a blanket so the Cinderella-storied horse can slip into something comfortable after the Belmont Stakes in June.

“I hope he wears it,” Holder said.

“Oh, he will,” Coburn quickly replied, as if speaking of a son. The executives also gave Coburn a $1,000 check to bet on his horse for a charity of his choice.

With no hesitation, Coburn promised the adoring crowd another win for California Chrome, which would be the first time a horse has won the Triple Crown since Affirmed took the title in 1978. A dozen others have tried since then.

The same crowd went upstairs to stand in line for autographs of various items. Some came bearing gifts, including that of a Nevada license plate by an aide of Gov. Brian Sandoval’s. Carolyn Coburn was touched by a well-wisher presenting a necklace and earrings.

What’s the first thing the couple plans to do upon winning the Triple Crown?

“Probably cry,” they both said.