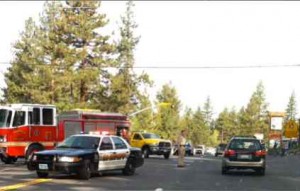 A Suburban struck a Ford Ranger. One person in the Ranger had to be extricated. Two people were flown to Carson-Tahoe Hospital and two were taken by ambulance to Barton Memorial Hospital. Another vehicle was also involved.

Names of the injured and their hometowns have not been released.

The two westbound lanes of Highway 50 were blocked for more than an hour while crews attended to victims and cleaned up the mess near the Pine Cone Resort.