While skiers flocked to enjoy the 16 inches of fresh snow that fell overnight at Sierra-at-Tahoe, state water officials could only shake their heads.

These late storms are good, but nowhere good enough to pull California out of what is now a three-year drought. What these storms are good for is salvaging a mediocre ski season, helping replenish the groundwater tables and warding off what is still bound to be an early fire season. The moisture also means this won’t go down as the driest year in the state’s history, but it could still be in the top five.

Statewide, the snowpack is 32 percent of normal. At the base of Sierra it’s slightly worse at 29 percent. That reading April 1 near Echo Summit showed a snow depth of 33.7 inches and water content at 8.1 inches. 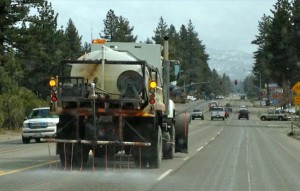 Caltrans was out March 31 laying down a solution on Highway 50 before the storm arrived. Photo/LTN

What is alarming is that Tuesday’s measurement is considered the most significant of the year because the bulk of the snow for the season should have fallen. From here forward it should be more about melting than accumulating.

Gov. Jerry Brown called a state of emergency earlier this year. Many cities are rationing water. Reservoirs look like it’s mid-summer or worse.

“We’re already seeing farmland fallowed and cities scrambling for water supplies,” Mark Cowin, director of the Department of Water Resources, said in a statement. “We can hope that conditions improve, but time is running out and conservation is the only tool we have against nature’s whim.”

It’s the snowpack in the Sierra that feeds the reservoirs downstream. They in turn provide a significant portion of the states’ drinking and irrigation water.

Lake Oroville in Butte County is at 49 percent capacity, when normally this time of year it is at 64 percent. Shasta Lake north of Redding is at 48 percent of capacity and should be at 60 percent.