Crappy outdoor displays are like pornography – you know it when you see it.

No true definition could be given of what a good or bad outdoor display is. That was essentially the conclusion of a workshop and online survey that South Lake Tahoe officials put together, as well as the consensus of council members on April 1.

At the workshop and online people were shown a variety of pictures – not from South Lake Tahoe – of outdoor displays. People leaned toward liking smaller, neater displays. However, larger displays of produce, tires and outdoor gear received positive feedback, too. 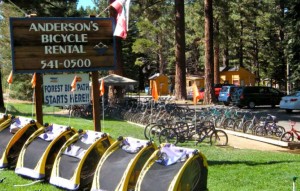 Anderson’s bike rentals has a special use permit for its display of two-wheelers. Photo/LTN file

But parameters must be drawn so there is a level playing field and the decision-making is less subjective. Plus, this allows officials to enforce the rules.

Solidifying outdoor display policy was one of the main items on Tuesday’s South Lake Tahoe City Council meeting. However, as much as this has been a controversial issue in the past, only one member of the public was in the audience when this item was discussed.

As Hilary Roverud, director of development services, said, it’s about balancing the needs of businesses trying to attract customers and the overall aesthetics of the city so people will want to come back and not think the town is junky.

“The majority of displays you see today are not consistent with city and TRPA code,” Roverud told the council.

TRPA doesn’t do any enforcement, while the city is sporadic with its enforcement.

The city is getting away from a tattletale type of enforcement and moving toward a more proactive approach. If code enforcement officers see a violation, they have the power to issue a warning immediately. If the infraction continues beyond two weeks, a citation may be issued.

• Continue to allow 16-square-feet of adornments at entrances as long as they don’t interfere with pedestrian accessibility;

Roverud and Mayor Hal Cole, who is on the TRPA board, plan to meet with officials from the bi-state regulatory agency about the displays. TRPA rules don’t allow for standup paddleboards under the outdoor amusement category for displays. Bikes, skates and mopeds are allowed.

• The council wants to revisit when sandwich board signs are allowed.

• The May 6 meeting was canceled because there will be renovations to council chambers to accommodate upgrades to the audio-visual room.