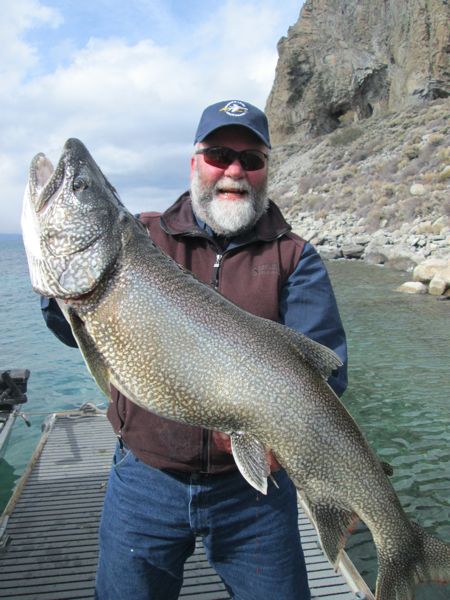 “The thing I love about going out fishing is you never know when you are going to get the big one.”

Those are the words of Gene St. Denis of Blue Ribbon Fishing Charters in South Lake Tahoe who for the past 15 years held the record for the biggest two-fish catch at 44.8 pounds.

He was on the lake by himself that day. After nearly landing a much bigger one, but having it break the line near the boat, St. Denis almost gave up. He was sure that one was in the 35-pound class. When it got loose he told Lake Tahoe News he was “devastated.”

St. Denis was using large 10-inch lures called monster sticks on the Nevada side of the lake between Cave Rock and Edgewood.

“It was just a remarkable day. These fish are 40- to 60-years-old,” he said. “The clear water in Tahoe makes it tough for them to make a mistake.”

He said the nutrients from the recent runoff are probably what are causing the fish to bite.

They also make for some good eating, he added. He said they have two to three times the omega 3 that king salmon have and they are cleaner than arctic shark.