Ski trail maintenance worker Jeff Eckland can thank his lucky stars he had man’s best friend looking for him when he broke his back tumbling in a massive avalanche at Kirkwood Mountain Resort a decade ago.

Although the highly trained canine leaped across the rainbow bridge 14 years ago, the golden retriever named Doc will live on in the heart of Eckland. The Kirkwood staffer is only one of three people in 159-chronicled avalanches who was rescued alive by a dog in the United States since records were kept by the National Search and Rescue organization in 1969.

The snow stopped, and the Kirkwood snow safety crew had already blasted the night before. But the wind loaded the slope above Button Bowl.

The three off-duty employees made a short hike up. Eckland took off first on his skis in front of his colleagues on snowboards when a soft slab avalanche wider than the length of a football field gained on him. Trees that appeared 300 yards away were suddenly in his face and scooped him up like a ragdoll.

He was held against the tree debris for 20 seconds, then buried under 4 to 5 feet of snow just above the lifts along Buckboard flats. 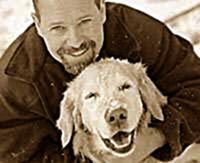 One friend rode down to Chair 3 to call in the destructive slide. The other went to the ski patrol station at Chair 2, where longtime ski patroller and Doc’s handler Dave Paradysz was digging a pit. He quickly took Doc on the snowmobile as far as he could go along the slide path while another dog looked at the end of the slide. Doc immediately headed for the trees debris.

Eckland was motionless and hypothermic, folded upside down in half with his ski boots next to his head. A piercing pain came from his back, prompting him to think a tree impaled him.

“I didn’t know which way was up. I was losing air and going black, when a paw broke the snow. I knew what it was, then all the oxygen rushed in,” he said, adding how his body corrected like a spring when the very excited dog dug him out.

Eckland estimated he was buried for about 15 minutes, the golden quarter hour for avalanche victims to survive.

It took three months of mainly rest for Eckland to recover from a broken back.

It broke his heart when Doc died in 2000. He immortalized the dog with a tattoo on his chest.

Eckland certainly is a believer in the avalanche dog program and tells his story whenever he can.

“If not for the dog, I’d be dead. This was the only tool we had that would’ve found me,” he said. “Their sense of smell is so incredible.”

In the land where skiers and riders may boast some of the deepest snow – at times on the planet, snow safety is serious business. Kirkwood maintains a program with seven dogs: Logan, 8; Stella, 8; Boji, 6; Pearl, 3; Huckleberry, 3, MoMo, 10 months; and Chewy, 7.

Fred Newberry, a Kirkwood ski patroller since 1999, handles Chewy, a golden retriever. He admits snow safety work can be unpredictable and “not an exact science.”

What he does count on is the dedication, training and drive of his dog, who primarily works inside the ski resort boundaries, but ventures out to assist Alpine and Amador counties in this rugged Sierra Nevada mountain country. The dogs are there to protect in-bounds skiers and boarders, along with the patrollers.

“The dog saved his life,” Newberry said of Eckland. “It’s why we not only have the dog program, but we support it.”

Many of the Lake Tahoe area ski resorts have dog avalanche rescue programs. Golden retrievers like Doc and Chewy are commonplace.

A godsend to Heavenly

With seven dogs of its own, sister ski area Heavenly Mountain Resort would add “good victim loyalty,” “high energy” and “good physical condition” as characteristics that make for an ideal avalanche rescue dog. Some of the dogs are related to others at fellow ski resorts. 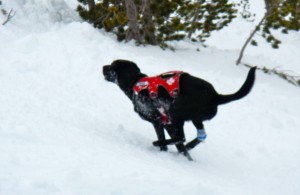 Heavenly patrollers got to prove the traits firsthand on a recent demonstration drill with 3-year-old black Lab Truckee. According to his playing card that Heavenly hands out, Truckee is Heavenly’s first Lab on its rescue dog team.

Child met up with fellow handler Colton Terry, who acted as a witness to the mock scene. The two discussed clues, then the collar came off and that was Truckee’s clue to go to work searching for a buried Heavenly employee.

“The idea is to get him downwind (to pick up the scent),” Terry said.

With a few quick, shallow digs at the snow, Child kept Truckee focused. His nose covered what appeared to be a mock slide path in a grid pattern. In a matter of a few minutes, the canine started digging feverishly where the staffer was buried more than 3 feet.

Truckee slid on his belly down the hill afterward to celebrate his find.

The patrollers bring in a few tricks of the trade to try such as using squares of wool against a sweaty body to simulate the human smell.

Terry has assisted Douglas County sheriff’s deputies with his golden, Summit, who’s in his ninth season.

Apparently, Summit’s work ethic is even better than Terry’s. The patroller admits when he wants to relax on his day off, Summit acts like he’s ready to work every day. And this could mean appearances at schools and events and serving as ambassadors of the resort. Guests can’t help but surround the canines and pet them like one recent day at the top of the Sky Express chairlift when a few people had their pictures taken with Summit and Madeline, another golden retriever.

But one thing is clear. These dogs are working machines, and they must go through a rigid certification program to do what they do. Terry mentioned the dogs having to locate two people in 15 minutes in a 200-foot square area.

“Search,” the stern call came from Sierra-at-Tahoe ski patroller Tim Owen to his 2-year-old golden retriever, Kopa, in the trees alongside Castle where a resort employee was buried on another recent drill. 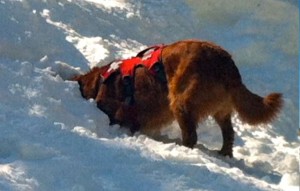 Kopa furiously digs for the buried person at Sierra in a training exercise. Photo/Susan Wood

In his second season at Sierra, Kopa comes from a long line of patrol dogs. Boomer Murphy from Squaw Valley is his father. Kopa, who has been in training since he was 6 months old, is thought to be “extremely playful, but disciplined.”

After a few minutes passing and a few nudges from Owen “to go to work,” Kopa went right to the hole. Sierra patrollers have a few holes they dig on Castle, but move them often to test the dogs.

Kopa has not been on a mission yet, but “we do train for the worst and hope for the best,” Owen explained. The dogs use the Swiss standards for avalanche dog rescue training, which involve phases of progress.

Kopa and 5-year-old Khuno, the senior dog in the group, assist in backing up the patrollers, especially when they sweep Huckleberry Canyon. The gates leading to the El Dorado County backcountry are increasingly enticing for riders seeking powder.

With more skiers and boarders each year going into the backcountry to make fresh tracks, the dogs become more of an asset. Varying layers of snow from soft to hard contribute to the chance of more avalanches.

“I think the combination of more backcountry users in general and having weather patterns we’re not used to out here make it more of a factor. People in the backcountry take it for granted that the conditions could be the same (all the time),” fellow Sierra ski patroller Shannon Maguire, who handles the newest addition to the resort’s pack of dogs, told Lake Tahoe News.

Nine-month-old Hunter, another golden, has been “killing it” in his training Owen praised, as Hunter and Kopa played outside the Grandview Lodge.

Maguire said it’s been a learning experience for both handler and dog. Each handler of the 22 patrollers at Sierra becomes an alternate handler before making the grade. Each dog goes to school for up to two years.

“It’s definitely a learning curve. He’s a puppy. It’s a lot of work because he’s surrounded by people and smells. It can be a challenge,” she said, smiling.

Maguire played hide-and-seek last summer to get Hunter in the mode of finding people.

Then after training switches to snow, the idea is to have the dogs ready in two seasons.

The avalanche rescue dog program was initiated in the 1997-98 ski season with patroller Bob Schults and his dog Sirius, who was tragically killed when he was struck by a vehicle on Highway 50 about a decade ago. The program was diligently maintained through the efforts of Keebah, Rush-To and later Cruiser in 2005.

“They’re a valuable asset when you consider most people in the ski area aren’t wearing beacons,” said Sierra Avalanche Center forecaster Brandon Schwartz, who works for the U.S. Forest Service in Truckee.

Avalanche conditions have been all over the map this season with varying layers of snow when it does appear.

A small avalanche recently occurred in Eagle Bowl at Kirkwood and someone had to be dug out.

Devastating avalanches have happened this year in the West from Colorado to Oregon, with some resulting in fatalities and living up to its name “the white death.” A book under that name highlights the large avalanche at Alpine Meadows north of Lake Tahoe in 1982.