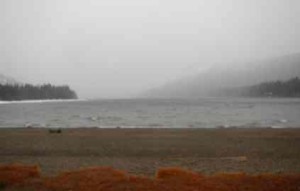 Snow and rain falls at Donner Lake on Jan. 11. Photo/LTN

About 20 young female dancers in traditional dress performed in conjunction with the annual Olympic Heritage Celebration, which commemorates the 1960 Winter Games at Squaw Valley.

Heidi Doyle, executive director of the Sierra State Parks Foundation, said she’s becoming a believer in the snow dance because the Nevada-based group was booked for the ceremony in October and it’s the first snow around Tahoe since early last month.