TWIN BRIDGES – Call it a prelude of things to come at Sierra-at-Tahoe ski resort.

The century-plus-old Cal band showed up for the 10th time to play and dance in its signature, animated style at the ski resort’s expansive, new plaza outside the main lodge this Martin Luther King, Jr. holiday weekend. Then, the members of the playful UC Berkeley band got on skis and snowboards to navigate the Broadway run with instruments in hand. 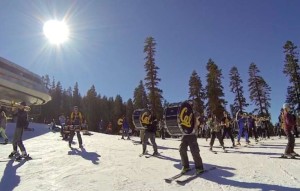 Members of the Cal band ski and play down the slopes at Sierra-at-Tahoe. Photo/Steven Hemphill

The exceptional eye-hand coordination would make the Winter Olympians the ski resort has spawned proud.

If the band can overcome a losing football season last fall, it can certainly negotiate the sparse snow of the Sierra Nevada this winter.

“It’s not too bad. The tuba is a well-balanced instrument,” tuba player Naddav Paran said after Saturday’s morning performance. Of course, it might help that he started skiing at age 4. And band members are instructed to take it slow.

Upon success of the midday ride, the tubas become the stars at the end of the day for their dancing rendition of “Lights Out.”

On skis and boards or not, the student-run Cal Band knows how to entertain. When the Bears band marches out of Memorial Stadium’s North Tunnel for football pre-games, the display is referred to as the “pacesetter of college marching bands” – or, “the pride of California.” Band members take over the streets when the team wins at home in Berkeley. 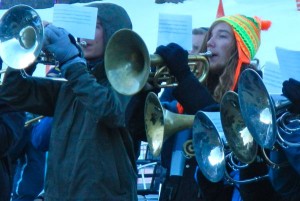 Stephen Ramaley is bundled up to play in below freezing temps. Photo/Kathryn Reed

Guests and staffers of the ski resort located 12 miles west of Meyers were rocking out for the morning session near Tahoe, a non school-sanctioned event scheduled to wrap up the end of winter break.

“This is awesome,” ski school instructor Jen Gilardi screamed. The employee, who followed the band when she lived in Berkeley, was texting friends to join her for the day to see the band.

Guests of the resort, the Mayali family of Kensington, were all smiles while watching. Dad Xavier went to Cal, and he and his wife, Michelle’s, two children play band instruments – Emma, 8, saxophone and Max, 10, trumpet. The Cal Band, in one of its several appearances at games, reunions, weddings and birthday parties, staged a performance at Max’s school.

“We make a point of coming up here for this weekend,” the Mayali matriarch said. 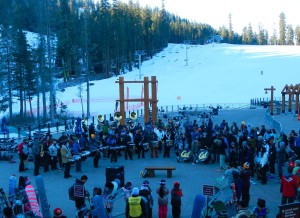 Before the sun comes over the ridge, the band welcomes skiers to Sierra.

Even the parents of the band members enjoy the venue.

“This is the only time I get to see him,” Doug Greer said of his piccolo-playing son, Ross.

Steps away, Kevin King of Folsom swayed and danced to the band’s repertoire of 150 songs ranging from the proverbial marching band tune “The Big C” to more contemporary hits such as “Carry On” by the rock band Kansas.

“I went to Davis, but the Cal Band is the best,” King said, adding he enjoyed the paving-stone plaza area Sierra installed this season.

The new area expands the base lodge space and seating, and resort management expects to stage many events there – particularly in the spring and summer. King’s alma mater band may play at the resort’s grand opening of the plaza.

Many people from all walks of life have connections to the Cal Band. Alumni musicians are invited at any time to join the band for the Tahoe-area weekend event, which continued on Sunday at Squaw Valley. 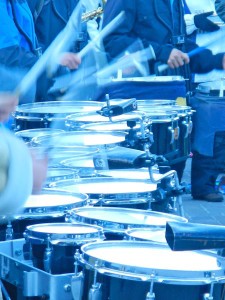 Despite the 19-degree temperatures early Saturday morning, most band members played without gloves, and at least one rotating conductor, a drummer, stripped off his hat and jacket upon taking the platform. Another percussionist rolled up his sleeves. The musicians have played in all sorts of weather conditions – even in a snowstorm a few years ago.

Senior manager Carolyn Richter recalled a time when she forgot to separate and defrost her mouthpiece one cold morning and paid for it with part of her lip sticking to the mouthpiece of her trombone. Still, she considers Sierra-at-Tahoe one of the more fun events the band puts on.

“It’s as much about the dancing as the playing,” Richter told Lake Tahoe News.

That’s one way to stay warm in the mountains.

“Our band (members) who come out for this also love to ski and snowboard, and Tahoe’s not too far away,” she added.

Agreeing was Richter’s No. 2 man up for the manager job next year, Stephen Stapleton. The trumpet player made a point of declaring the ski weekend as one of his favorites, and he’s apparently not alone. About 140 members of the 200-person band showed up to take part. 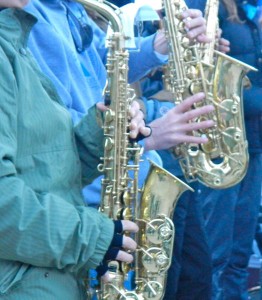 Playing without the warmth of gloves.

“The Cal Band brings great energy to the resort. It’s so fun to have them skiing down Broadway and playing music at the base,” Sierra General Manager John Rice said.

The Cal Band has made a variety of performances, including the San Francisco Symphony’s Black and White Ball and even the Ed Sullivan show years ago. More recently, the high-energy band led the San Francisco Giants downtown victory parade when the team won the World Series after a half-century drought.