SNOWMASS, Colo. — The rustic ski lodge has been a staple of ski towns pretty much since the first resort was erected on the side of a mountain.

A drastic design shift has taken place the past few years. Chandeliers made of antlers, animal trophies on the wall, paintings of cowboys and snow-covered buffalo are out. Clean lines, contemporary art and open floor plans are in. 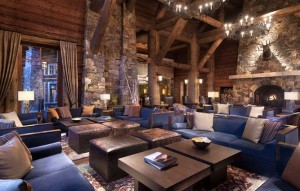 The Ritz-Carlton Bachelor Gulch in Beaver Creek kept the deer above the fireplace even after the remodel this year. Photo/Provided

After decades of rustic traditions, the ski lodge is getting a modernist upgrade to keep up with the new breed of traveler.

“Things are changing so fast in our business world that even keeping up in the hotel world is very difficult,” said Hugh Templeton, general manager of the Viceroy Snowmass in Snowmass, Colo. “That younger person is expecting to have something in their travel experience that reflects who they are, not who the hotel wants them to be. I think that’s been a very big change.”

The transformation has been relatively recent in the ski resort industry, following a generational shift in clientele. Baby boomers grew up with rustic, chalet-style ski lodges, so ski resorts stuck with those designs because that generation was where the money was coming from.

But over the past several years, there’s been a shift in demographics as so-called millennials came of age and started spending money. They’re more tech-savvy than their parents, and so plugged-in at home that they expect fast Internet connections in hotels and just as many cable channels.

Their tastes in design are different too, often preferring clean, minimalist decor over quaint and cozy. In response, some ski resorts feature stone floors instead of wood, contemporary lighting and furniture, and art and decorations that are not necessarily themed on winter scenery.

Hotels like Viceroy Snowmass, Hotel Terra in Jackson Hole, Wyo., and the Ritz-Carlton Bachelor Gulch in Beaver Creek are examples of U.S. resorts that have gone a more contemporary design route. The trend is taking off internationally as well, seen in places like The Omnia, Chedi Andermatt and the W Verbier in the Swiss Alps, and the Hotel Altapura and Hotel Le Kaila in the French Alps.

Viceroy Snowmass and Hotel Terra also sometimes offer a twist on the rustic look, encasing the typical-for-a-ski-lodge wooden beam in steel, painting rock walls in a variety of colors, and featuring artwork with wildlife — but as abstract images instead of the typical moose standing next to a pond in the snow.

Some resorts are updating in sections instead of a major overhaul to keep from overwhelming their returning guests.

“The aging baby boomers who are now retired, semi-retired or the empty nesters, they have a little bit more of an old-fashioned design desire because of when and where they grew up,” said David Kingston, general manager of Hotel Terra. “I think the millennial population, which is large and starting to spend money, is going to dictate how seriously or deeply that design concept goes.”

Some of the older design concepts were the result of necessity. Resorts and lodges built on mountainsides had to be made from wood and small stones because it was too hard to get materials or machinery up winding roads and too difficult to build with large, bulky materials on the slopes.

Advances in technology have made construction easier these days, even in tight mountain spaces. Builders can now take a pair of 10,000-pound (4,500-kilogram) concrete walls and piece them together with relative ease instead of building wooden frames with enormous cedar or oak I-beams across the ceiling.

The new designs are not only “stylish and contemporary,” said Templeton, but they allow hotels to be more energy efficient with easier upkeep. “You try to maintain an all-wood building, it’s very difficult,” he added.

And because skiers expect the familiar rustic look, anything different makes an impact.

“Not having that, we create a lasting memory,” he said, adding, “You can’t wait to get back because it’s so different.”