With Lakeview Commons still in its infancy, South Lake Tahoe officials are struggling to figure just what it should be.

While the agenda topic Tuesday at the council meeting was to recap the summer concert series run by Rob and CarolAnne Giustina of OnCourse Events, much of the talk was about what else the area at El Dorado Beach could offer.

Family nights, movies, alcohol-free events, different musical acts – all of these were suggestions. Instead of expanding what OnCourse does the council instead directed city staff to come up with events, perhaps with partners, that the city can call its own. 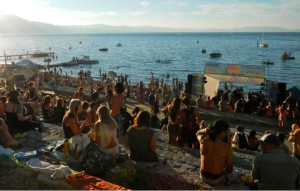 Live at Lakeview will be returning for a third summer in 2014. Photo/LTN file

One of the issues brought up by Lauren Thomaselli, city recreation manager, during her Dec. 10 presentation is that even though the city is a major sponsor of Live at Lakeview, it was not featured prominently in advertising and promotional material. Besides providing $2,500 in cash, the city waived $5,000 worth of staff hours and $3,250 in rental fees.

Top billing went to Coors and Heavenly Mountain Resort. To eliminate the beer sponsor it would cost the city an additional $12,000 per summer. To get rid of alcohol completely would require a $35,000 contribution, according to the staff report.

CarolAnne Giustina told the council the demographics of the audience changes throughout the course of the Thursday night Live at Lakeview concerts. It starts out with many who are older than 50, then families come and the later crowd is younger and tends to drink more.

People smoking pot was another issue that was raised. It was agreed police officers will make a stronger presence early on and that perhaps fewer warnings and more citations will be issued.

It’s against the law in California to smoke marijuana in public even with a medical card. But one thing officers consider is whether the DA’s office will prosecute what amounts to a minor crime.

Next year parking will likely be problematic because the Harrison Avenue project will be under way. Everyone agreed better promotion of the free lot at the rec center is needed. Using a shuttle between the lot and Lakeview was also broached.

More than 1,000 people attended each of the 10 concerts. More than 300 came via bicycle, while a couple dozen were in some type of watercraft.

Despite some of the second-year hiccups, the council had high praise for the event and Giustina said she is willing to make necessary improvements.

OnCourse Events’ two-year contract runs through summer 2014. While the South Lake Tahoe company would like the first rights of refusal for 2015, that can’t happen because it was not in the original request for proposal.