Twenty-five minutes to get from the South Shore to the North Shore? Yes, by ferry.

That is the goal of the Tahoe Transportation District, the lead agency trying to bring ferry service to Lake Tahoe. By summer 2016 two 120-passenger ferries could be traveling year-round between South Lake Tahoe and Tahoe City.

It is being called an environmental asset as well as a transportation tool.

“It would be equivalent to a light rail corridor for Tahoe,” Alfred Knotts, project manager, told Lake Tahoe News. “This is part of the long-term vision and how each piece creates a regional transit system.” 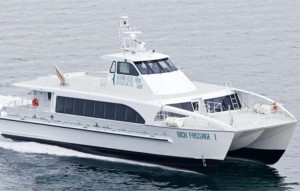 Comments are being taken until Jan. 3 on the notice of intent/notice of preparation for the project. Comments will be incorporated into the draft environmental impact report and draft environmental impact statement. Those are expected to be released in a year. The final EIR/EIS could come out in summer 2015, with permitting that fall, and upgrades to the piers and other land improvements done in the 2016 building season, and service starting when that is completed.

Knotts gave a presentation Dec. 4 to the Tahoe Regional Planning Agency’s Advisory Planning Commission. He will do the same Dec. 13 at the TTD board meeting.

Parking concerns at both ends of the lake were brought at the meeting, as were greenhouse gases, scenic impacts, dredging and fisheries.

The goal is to not have everyone drive to one of the marinas, but instead take another form of transportation – bus, bike or foot power.

“We don’t want parking spilling over to business or residential areas that could be adversely impacted,” Knotts said. It may mean increasing the bus service to make this happen.

According to TRPA, piers are a scenic concern. That is one reason the Grove Street Pier is being looked at instead of the Tahoe City Marina. It’s possible piers at both ends of the lake will need to be extended and possibly widened to accommodate the boat, people and existing services.

Marina owners have been consulted and are privy to what is being contemplated.

It’s estimated that during peak summer travel the boats would make eight trips a day, carrying 120-passengers. It could be a tool for commuters, skiers, people wanting to dine at the other end of the lake, or tourists looking for something fun to do.

Preliminary plans are for 10 spots for bikes, but people who spoke Wednesday said that number should be increased. Ensuring skis and snowboards can be secure will also be worked into the design, and maybe golf clubs.

Transit officials have been looking at Washington state ferry service to come up with a vessel that could handle the needs and conditions of Lake Tahoe. Ideally, the boat will be able to weather the high seas that during storms have the lake looking like the ocean. However, the contingency plan would be to bus people back to the originating marina if need be.

TTD would hire an operator much like it has done for the South Shore bus service BlueGo.

Cost of the boats and marina upgrades are estimated to be $33 million. Annual operating costs come to $3.3 million. Federal transportation subsidies would help pay the operating costs. State and federal money are likely to pay for the capital expenses. Until the environmental documents are completed funding cannot be secured.

• Future workshops and meetings about the ferry will in part be determined based on the comments received so they can be addressed.