Three businesses that have never operated in South Lake Tahoe are expected to open their doors in 2014.

Auto Zone is going in next to Izzy’s Burgers on Highway 50. The martial arts building will be torn down. That used to be the garage where Buzz Springmeyer worked. His widow, Marjorie Springmeyer, still owns the land.

Construction on the new building will start in the spring.

The closest Auto Zone stores to South Lake Tahoe are in Gardnerville and the two in Carson City. 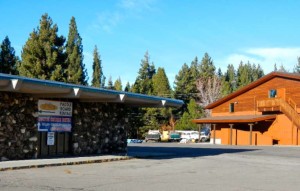 The building on the left will come down and a BevMo will be built; while on the right a shoe store is slated to go in adjacent to T.J. Maxx. Photo/LTN

Another building in South Lake Tahoe is also going to be razed next year. That is at the Y next to T.J. Maxx where a bike shop, standup paddle and Laundromat are located. In its place will be a 10,000-square-foot building for BevMo.

“We have not received an application for BevMo, however, we did have a pre-application meeting with them to tell them what would be required should they apply,” Judy Finn, associate planner with the city, told Lake Tahoe News.

However, two other officials with the city have told Lake Tahoe News that the Bay Area company is going to expand its operations here next year. BevMo – which is short for Beverages and More – has 146 stores based near San Francisco, Sacramento, Los Angeles, San Diego, Phoenix and Seattle.

No one from the corporate offices in Concord returned phone calls. However, city officials said the goal is for BevMo to open in November 2014.

There is a property dispute concerning the building that exists today. The owners of the T.J. Maxx building allege about 3 feet of the building are on their property. But because it will be demolished and a new one built it could be moved down Emerald Bay Road and still work.

Both buildings are owned by out of town landlords.

The space next to T.J. Maxx is going to be occupied by a shoe store, according to Mayor Tom Davis. He announced this at the Nov. 5 City Council meeting.

The exact store has not been made public, but unofficially it will be DSW, a designer shoe warehouse.

“I just spoke with the Garfinkle rep last week and they are still trying to resolve the water pressure issue with STPUD and Lukins before they can rent the tenant space,” Finn said. The shoe store has not submitted any paperwork to city planners.

While an agreement has been worked out between South Tahoe Public Utility District and Lukins Brothers Water, a contract has not been signed for the Garfinkle (aka T.J. Maxx building) to become a STPUD customer. It was supposed to be finalized in October.