While opening day at Heavenly is just two days from now, there may come a day when the South Shore resort is open year-round for recreation.

Skiing starts this week, as does the comment period for the scoping for the environmental documents involving the expanded summer recreation. While much of the first phase of the non-skiing on-mountain recreation is completed (the zipline opens in December and rope courses in the summer), Heavenly wants to develop a mountain bike park, hiking trails, and more ziplines and rope courses.

It’s possible construction of the mountain bike park would start in 2015. The 8 to 10 miles are proposed to include beginner to expert terrain, according to Sally Gunter at Heavenly. But it won’t necessarily cost avid cyclists anything to ride at Heavenly Mountain Resort. This is because the plan is to tie the park into the Tahoe Rim Trail and connect to Van Sickle Bi-state Park. 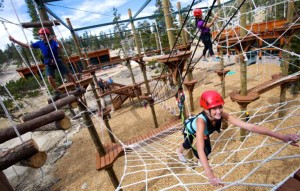 The ropes course above Tamarack Lodge at Heavenly opens to the public in summer 2014. Photo/Provided

“We are aiming for an intermediate trail system catering to families and folks who want to play together,” Jonathan Cook-Fisher, USFS recreation special uses program manager, told Lake Tahoe News. “We want access to and through Heavenly that connects to a wider system. Connectivity to recreation in the Tahoe basin is key.”

Cyclists, for a fee, would be able to ride the gondola and then access trails via Dipper, Comet and Tamarack chairlifts. It would be possible to ride off the mountain – back to town, or ride loops on what are commonly known as ski slopes.

The first phase of non-skier activities centers around where the gondola ends on top of the mountain. What is being proposed next would spread the activities out more – east toward East Peak Lake Basin and west to Sky Meadows Basin. The three areas would be connected via ski lifts, hiking trails, ziplines and roads.

A snowcat emergency evacuation route for the gondola line is also part of the latest plans.

About three miles of hiking trails will be added to what’s already available.

The water activities don’t actually involve getting in the water. Cook-Fisher said it’s more like learning about mining, perhaps having a sluice box, as well hiking around East Lake.

“For us, it’s all about educating the next generation,” Gunter told Lake Tahoe News. “It will create an appreciation for the national forest and outdoors.”

She anticipates the apparatuses and bike park will be a draw for locals and tourists.

These new activities are allowed now because of the Ski Area Recreational Opportunity Enhancement Act of 2011.

• The deadline to comment on the scope of the EIS is Dec. 20. The Forest Service expects to release a draft environmental impact statement in August 2014 and a final EIS the following January. For more info, go online.

• TRPA’s Advisory Planning Commission will discuss the proposal Dec. 4 at 9:30am at the agency’s Stateline office. The Forest Service will host a workshop Dec. 18 from 5:30-7:30pm at the South Lake Tahoe office, 35 College Drive.