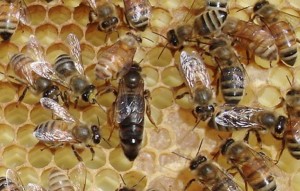 Survival of the honeybee is of much greater importance than whether or not there will be honey on store shelves.

“We are having a hard time keeping bees alive … mostly the honeybees,” John Miller, president of the California State Beekeepers Association, told Lake Tahoe News. “Domestic honeybees are the global champions of pollination and honey production. They may be the most beneficial insect on Earth.”

But their habitat is shrinking as farmers plant nonnative crops that then take away areas for bees to forage.

Some of this is happening in North Dakota – one of three locations where Miller operates Miller Honey Farms. (The other locales are in Newcastle in Placer County and in Idaho.) North Dakota farmers are planting soybeans and corn on land that once was “summertime pasture for bees in California.”

This is one of the topics that will be discussed Nov. 19-21 during the state organization’s annual meeting at Harrah’s Lake Tahoe.

“We are the gatekeepers of the food supply. Thirty percent of what people now eat in America is directly traceable to honeybees,” Miller said.

The afternoon session on Nov. 19 will be about improving access for honeybees as well as the link between bees and almonds. Miller said the two are co-dependent.

What people are putting on their crops is of importance too, because bees consume pesticides and herbicides. Even the average homeowner should avoid applying pesticides in the middle of the day when “pollinators are visiting.”

Miller says the domestic-European honeybee is the most productive bee. All fruits with a pit benefit from them, as do pumpkins, kiwis, apples and berries, to name a few foods.

“As we become more wealthy as a planet, we improve our diet. As we improve our diet, we buy more of the foods that are dependent on bees for pollination,” Miller said. Without bees, he said, people will be eating a whole lot more corn and rice.

What groups like his can do is advocate for conservation programs to be reinstated. Miller said for various reasons a lot of public land is not available to beekeepers.

“We have to be the voice for our living. There is no government program,” Miller said.

He pointed to the Placer Land Trust as an entity that has been good to beekeepers. The group planted a seed mix that is a benefit for native species and pollinators.

While bees on their own fly from area to area pollinating plants and creating nectar, it is the beekeepers like Miller and his brethren who bring the bees in large numbers to farmers.

They are portable as they happily live in a hive. Some people are hobbyists, while others make a living as beekeepers. It’s not unheard for a beekeeper to have 10,000 hives.

The beekeepers can then make honey, which comes from just about every state. Flavors are all over the board, and this is because the bees are foraging on so many different plants.

Some facts about honey from Miller:

• Honey is the only food consumed by humans that is produced by an insect.

• The average honeybee will make only one-twelfth of a teaspoon of honey in her lifetime.

• To make 1 pound of honey bees travel as far as 55,000 miles, getting nectar from more than 2 million flowers.