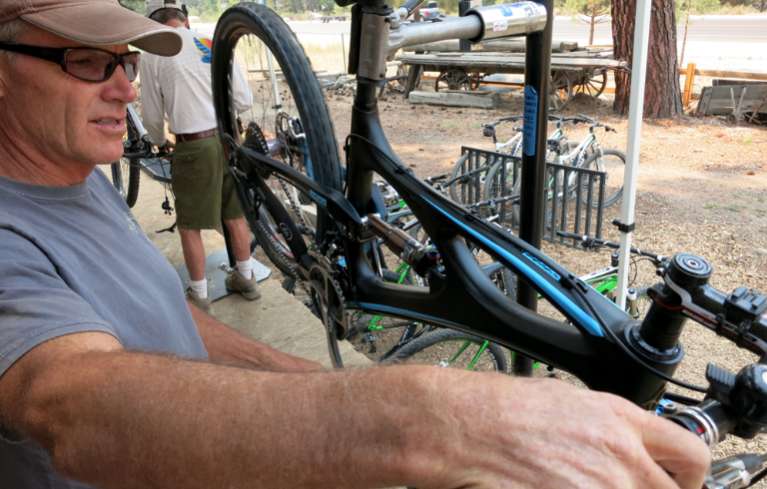 After 30 years of being associated with the Flume Trail, Max Jones still has fun on it and likes getting first-timers to ride it. Photos/Jessie Marchesseau

INCLINE VILLAGE – Every time Max Jones rides the Flume Trail, he can’t help but take notice of a certain overhanging boulder that once caught the bar of a chain saw he was carrying on his back that sent him, his bicycle and the chain saw tumbling down the steep granite hillside “headed for Sand Harbor.”

“It could have been bad, but ended up just being really dusty,” he said.

That was 1983, just days before Jones finished clearing the Flume Trail. This year marks the 30th anniversary of the summer Jones spent making the trail passable on a mountain bike. Today the 13.2-mile Flume ride with its sweeping views of Lake Tahoe is one of the most well known bike rides in Tahoe and is consistently ranked as one of the top mountain biking trails in the country. It goes from Spooner Lake to Incline Village.

Jones did not create the Flume Trail; it has been in existence since the 1870s when water flumes, or elevated wooden channels, transported water from Marlette Lake to nearby lumber operations and into an underground pipeline that took it all the way to Virginia City. The entire system was a true engineering feat in its day. Eventually replaced by a more modern pipeline in the mid-1900s, the wooden flumes were abandoned and mostly removed, but the flume route remained on many maps. This was how Jones learned of it soon after moving to Incline Village with his wife, Patti McMullen, in 1982. 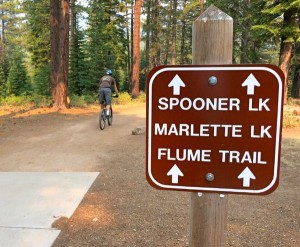 A mountain biker heads out on the Flume Trail.

At the time, Jones was just breaking into the world of professional mountain biking, and was riding every local trail he could find. In the summer of 1983, he decided to check out the blue line labeled “Flume Trail” on his maps. Having recently picked up his very first mountain bike sponsor, Ritchey bicycles, Jones took out his brand new Ritchey to test out the trail. What he found was an overgrown mess.

Though the entire ride is more than 13 miles, technically, the Flume Trail is only the 4.5-mile stretch of trail that connects Marlette Dam to Tunnel Creek Road. The first time Jones rode it, that 4.5-mile section took him nearly five hours. In some parts willow bushes were so thick he had to throw his brand new bike as far as he could into the bush then crawl through, grab and throw it again. Other sections had been completely wiped out by landslides.

After such an experience, most riders would have just written the trail off as unrideable and moved on, but for some reason Jones kept going back. He took tools with him, either on his back or strapped to his bicycle and worked on clearing the trail, little by little.

He worked all summer that year, clearing brush and boulders and hacking through abandoned aluminum pipes entirely by himself with nothing more than hand tools. Only during the final few days did he convince the local forest ranger to let him bring help and a chain saw to finish it.

“I wanted a place to ride. It’s as simple as that,” Jones said of the efforts he put into clearing the trail.

Jones spent 13 years – from 1983-96 – as a professional mountain biker. He has ridden all over the world, from Switzerland to Japan. He is a two-time national mountain bike champion, has had four top five finishes at the World Championships and has been inducted into the Mountain Bike Hall of Fame. He still thinks the Flume is one of the best rides out there.

“It’s not technically the most difficult trail around, but I have yet to come across a trail that’s more scenic,” he said.

Now 55, Jones estimates he’s ridden the Flume Trail 300 or 400 times. As owner and operator of Flume Trail Bikes, which rents mountain bikes and shuttles riders between the start and finish points of the trail, he still has the opportunity to ride the Flume on a regular basis.

One of his favorite things is taking first-timers on the trail, especially ones who have never seen Lake Tahoe. The views from the narrow trail winding along the steep granite hillside are so spectacular riders have to be careful not to ride right off the edge.

“They are the best views of Tahoe at Tahoe,” Jones said, “and you have to work to get them. You can’t just step out of your car, which I think makes them better, actually.”

Tahoe Area Mountain Biking Association President Kevin Joell also cites riding with first-time Flumers as one of his favorite things about the trail. He calls the views “absolutely spectacular” and said the consistent reaction he gets from other riders is just “wow.”

“It’s one of the top 10 most iconic trails in the world,” Joell said, pointing out that the Flume Trail graces the cover of the International Mountain Bicycling Association’s book on how to build great trails.

Joell has not ridden the trail as many times as Jones, but said it is still way more times than he can count. And he keeps going back, noticing something new every time.

Though he has only been running Flume Trail Bikes since about 2000, Jones has been involved with the trail in one way or another since he first cleared it. He and his wife ran a pro bike race on the trail for many years, and he helps with trail maintenance annually. The couple also spent 27 years running the cross country ski center at Spooner Lake as concessionaire for the Nevada Division of State Parks. They ran the ski center from the park in the winter and the bike business in the summer. In 2012, the couple stopped running the ski center and this summer moved Flume Trail Bikes to Tunnel Creek Station just south of Incline Village. This is their first year in the new location, and business is better than ever.

Though Jones may not have invented the Flume Trail, he did re-invent it. His vision and persistence paid off in the form of a world-class mountain bike trail which has since been enjoyed by hundreds of thousands of locals and visitors to Lake Tahoe.

Flume Trail tips from the experts:

• On the initial climb, be patient and allow your breathing to acclimate to the altitude change.

• Bring plenty of water and food. It’s going to take longer than you expect because you’re going to want to stop and take pictures and admire the views.

• Be cautious around blind corners, ring a bell or call out when approaching.

• Avoid riding through sand. Look ahead to spot how other riders have been navigating the area.

• If you’re afraid of heights, don’t look down. Focus on the trail ahead.

• Take your time and enjoy it.