Depending on where you are in the Lake Tahoe Basin, more yellowjackets may be buzzing around compared to years past.

“The vector techs are seeing more yellowjackets this season because the winter was more mild, which allows more queens to survive through the winter. Each queen trapped in the spring represents one less nest of up to 5,000 worker yellowjackets in the summer and fall,” Karen Bender with El Dorado County Department of Environmental Health told Lake Tahoe News.

She said it’s not just Tahoe that is affected, but all parts of the county are seeing an influx of the bees. 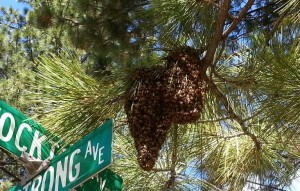 A honeybee nest found in May by El Dorado County vector control. Photo/Provided

On Monday her department had 16 service calls related to yellowjackets and have been averaging about 10 a day for the past week. Specialists apply a pesticide that comes in a white powder. It’s a product that is not available to the public.

“One reason we want vector control to go out is because we don’t want to kill honeybees,” Bender explained.

Honeybees are the “good” bees that are needed to keep everything pollinated; after all they are responsible for 80 percent of the insect pollination.

Yellowjackets are part of the wasp family.

County residents pay $6 a year via property taxes for vector control, so a home visit is part of taxes already paid. What workers won’t do is go inside a residence; they only deal with outside bee and wasp issues.

Yellowjackets can make nests in the ground, under decks, in walls, under eaves and other places. Because they can be on the ground it’s important to pay attention to each step to avoid being swarmed by the yellowjackets.

In the forest the bees don’t seem to be as much of a problem as in more populated areas.

Holly Holwager, a harvest inspector with Lake Tahoe Basin Management Unit, said, “We are seeing the same amount of bees in the field, however they seem less aggressive than last field season.”

Bees and wasps are attracted to water, go after food and like to sting people, too. Last weekend a woman was stung while playing tennis at Zephyr Cove park.

Bee and wasp stings can be lethal for people who are allergic to them.

“When we do see the stings they can cause a variety of reactions – from minor irritation to more serious allergic reactions,” Withers told Lake Tahoe News. “They do tend to be more numerous and more aggressive in September-October, especially as the weather cools, until the first hard freeze.”

Barton Urgent Care and Family Practice has also had an uptick in sting cases recently, but so far their numbers have not surpassed 2012 figures.

The medical advice is that minor stings should be treated with Benadryl and a cold compress. If the sting is infected, get medical help because antibiotics may be needed. Call 911 if after a sting there is tightness of the throat, nausea and vomiting, difficulty breathing, cramping or abdominal pain, or fainting.

Having an epi pen is also advisable for those with known allergies.