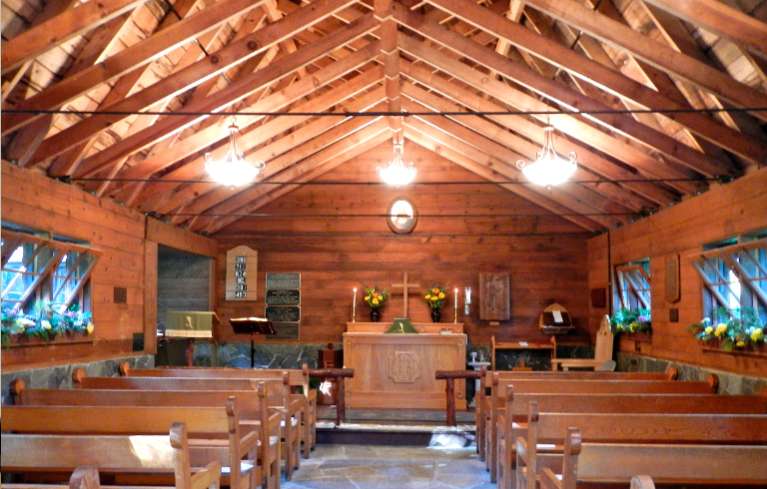 Services have been delivered at St. Francis of the Mountains at Fallen Leaf Lake for 90 years. Photos/Kathryn Reed

FALLEN LEAF LAKE – Many people say their church is found outside immersed in the mountains. The chapel at Fallen Leaf Lake takes that to another level.

Bells ring through the forest to announce the start of the 8am service on Sunday.

And while St. Francis of the Mountains is a traditional church in most ways, it embraces nature. Walking up the slate path it’s like being in a lush green garden. A chill is in the air on this last Sunday of July. 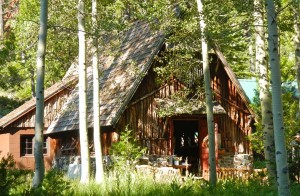 This seasonal church welcomes more than those who call Fallen Leaf Lake home.

Inside it’s like the walls are a warm coat – even for those who prefer a church of granite.

The stone – even on the floor – and the wood interior bring the outdoors inside.

This chapel was a vision of those who helped establish the enclave at the base of Desolation Wilderness on the South Shore. It was in 1921 that the stone foundation was laid by William Price and Walter Hansen.

A variety of fundraisers were conducted to raise the money to make the sanctuary a reality.

The Rev. David Evans delivered the first service in 1923; with the chapel being dedicated to Price.

When first built, the church was non-denominational. It was in 1978 that the Price family deeded the chapel to the Episcopal Diocese of Northern California.

“The cross upon the altar came from the temporary chapel at Grace Cathedral in San Francisco after the earthquake and the fire of 1906. The marble credence table is made from the only unbroken pillar of the communion rail of the old Stanford University Chapel that survived the quake,” Janet Beales Kaidantzis writes in the book “Fallen Leaf: A Lake and Its People 1850-1950”.

The interior is simple – proving that opulence is not needed to commune with God. 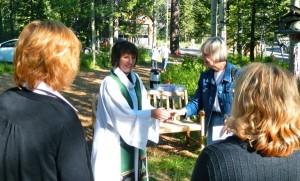 Guest ministers deliver sermons on a rotating basis. On July 28 it is Debra Warwick-Sabino from Grace Church in Fairfield at the pulpit. She has been coming to Fallen Leaf Lake for 13 years.

“We are all one. We really get that at this place,” Warwick-Sabino tells the more than dozen people gathered for the first service.

Most people have attended previous services. This is also a more packed room than usual for the early session. Warwick-Sabino asks how long people’s roots at Fallen Leaf Lake go back. Fifty years for two people.

Someone has requested music. Warwick-Sabino’s husband, Rob, is quick to accommodate. He is a music director at a Catholic church. He uses the tiny piano off in the corner to provide the accompaniment for the small congregation.

A memorial garden is to the left of the chapel. Names of those who have died line a wall of stone. One area is dedicated to volunteers for Fallen Leaf’s fire department. A large round is set aside for remembrance to people’s four-legged family members.

This area is a bit overgrown in a natural way that allows one to commune with Mother Nature while remembering those who are gone.

• The chapel is located at the far end of Fallen Leaf Lake just before the fire station.

• Services are June-September at 8am and 10am; and are open to anyone.