Flying over California recently on my way back to Washington, I was dismayed to see how bone-dry the state is so early in the summer season.

There was virtually no snowpack. Lakes and reservoirs are circled with rings of barren, dry soil. And plumes of smoke from forest fires dot the skies, something that will worsen as the fire season progresses.

The message is clear: We must do more to prepare for increasingly harmful dry years by capturing more water in wet years. In short, California needs a lot more water storage – and we need it now.

The dire state of affairs was confirmed by David Hayes, outgoing deputy secretary for the Department of the Interior, at a recent budget hearing. Despite a promising start to the water year, Hayes testified, “This is the driest January-through-April period in California’s history in the last 100 years.” 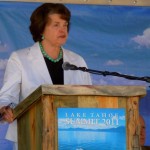 Farmers, of course, are acutely aware of the situation. Water allocations for some of the largest South-of-Delta Central Valley Project irrigation districts stand at just 20 percent of their contract amount. Declining reservoir levels suggest that next year will be even worse.

Complicating matters are pumping restrictions mandated by the Endangered Species Act. Despite being found scientifically deficient by a federal court and the National Academy of Sciences, these restrictions continue to have a negative effect on water supplies throughout the state.

The Bureau of Reclamation is putting together a plan to address this year’s water shortages based on water transfers that could increase the water supply for South-of-Delta contractors to the equivalent of a 40 percent allocation.

These one-time patches, however, are not an adequate solution. Absent state action, it is my view that we may be faced with the possibility of more far-reaching changes, such as modifications to the Endangered Species Act.

Expanding and improving California’s water storage capacity is long overdue. The last time we saw significant state and federal investments in our water storage and delivery system was in the 1960s, when the state’s population stood at 16 million. Today, that same system supports 38 million individuals and will need to support 50 million by 2050.

If we don’t take significant and rapid action, I fear California is at risk of becoming a desert state.

The need for additional storage is hardly a revelation. More than a decade ago, legislation passed that authorized the Bureau of Reclamation to do feasibility studies on expanding or building four reservoirs: Shasta, Sites, Los Vaqueros and Temperance Flat.

Good news, but the eight years it took to complete the draft study was entirely too long. Even worse, final feasibility studies aren’t scheduled to be completed by the Bureau of Reclamation until late 2016.

Building or expanding these four reservoirs would result in hundreds of thousands of acre-feet of additional water storage, benefit urban and rural communities and increase the pool of water available for releases that benefit fish species. Waiting a decade or more for these studies is unacceptable. The Bureau of Reclamation must complete these studies, and they must do so now.

California’s Legislature also must do its part by updating the long-anticipated water bond and ensuring that it includes adequate funding for water storage.

The current water bond, which was approved by the Legislature in 2009 and scheduled for the November 2010 ballot, has been repeatedly postponed.

The bond includes $3 billion to improve state, regional and local surface storage; groundwater storage; modernizing reservoir operations; and conveyance to improve interregional system operations. But with an overall cost of $11.14 billion, it will be difficult to win voter support.

With only three months left in the session, it is important the Legislature work to craft a scaled-back bond that provides robust water storage funding.

Because the full benefits of expanded storage capacity can’t be realized without the ability to move additional water supplies, it is also vital to complete the Bay Delta Conservation Plan. This long-term state and federal effort to restore the Sacramento-San Joaquin Delta is essential if we are to acquire the regulatory approvals necessary for new water transportation infrastructure.

As chairman of the Senate subcommittee that funds the Bureau of Reclamation, I have done what I can to address California’s water challenges.

Over the past few years, the Senate has approved bills that permit additional water transfers, authorize and expedite groundwater banking plans, require drought management plans and set a deadline to complete the Bay Delta Conservation Plan.

But there is still a lot of work to be done, particularly in the area of water storage. I will continue to urge the Bureau of Reclamation and the state to move as fast as possible to approve plans and funding to allow us to bank more water in wet years for the increasingly dry years.

Although California is getting drier, plans are in place to move us in the right direction. But it will take a commitment from federal, state and local stakeholders to get us there. There is no time to waste.