The Central Coast’s famed aquarium plans to go dark Labor Day weekend on one of its most popular exhibitions to date – the Secret Life of Seahorses. The 15 species of these elusive creatures and kin – the surreal-looking sea dragons and alligator pipefish — danced and fluttered in their tank, spawning “ooohs and ahhhhs” among many visitors on a recent Saturday visit to the 322,000-square-foot attraction located alongside Monterey’s Cannery Row.

“It looks pretty leafy,” one man declared, staring at one of the spindly sea dragons. 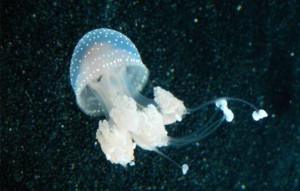 A white-spotted jelly at the Monterey Bay Aquarium. Photos/Kathryn Reed

Many saucer-eyed children pointed and stood in awe alongside the adults. Beyond appreciating the sea life, all learned of the hazards these gentle creatures face – from the souvenir trade to fishing nets. An entire exhibit is dedicated to the perils of trash deposited in the ocean.

The aquarium is a kid’s paradise, with plenty of interactive displays such as a quiz that compares the number of baby bottles a young gray whale consumes in a day in contrast to a human – 2,000 versus six. Many displays are designed to pique children’s interest in the enjoyment and conservation of sea life along the Pacific Coast. And that’s no accident.

As public relations coordinator Mika Yoshida put it: “We start them young (with the message of protection).”

Moreover, the aquarium highlighting 35,000 creatures representing 550 species in 34 major galleries walks the talk by “greening” up the place. For example, plastic bags at the large gift shop are a no-no.

A big part of the aquarium’s conservation message focuses on its seafood watch – which comes with a handout of types of fish to avoid and others bearing no threat to overfishing or mercury content.

The Monterey Aquarium also backs up its signs in Spanish for a broader appeal.

Target marketing aside, the massive aquarium has brought in the masses, and apparently has shown no sign of slowing down during the recessionary years.

“We’re not seeing any impact because we usually end up getting a bump from locals and day trippers from San Francisco,” Yoshida told Lake Tahoe News in discussing any drop off of the destination visitor who may stay multiple nights.

“We’ve actually had a fairly strong attendance in recession years. For a lot of folks, Monterey and the aquarium are an affordable California vacation option in years when they aren’t going to plan a big cross-country trip,” he said.

Last year, the aquarium recorded 1.8 million visitors. Many have taken in the psychedelic “Jellies Experience,” which opened in March 2012 as one of three evolutions of jellyfish displays. The aquarium even built a laboratory to grown its own.

Each visitor could spend hours at the practically laid-out, airy site — taking in puffins and penguins swimming and waddling over their turf, capitalizing on special, behind-the-scenes tours or experiencing the magnitude of a three-story kelp forest benefitting by the aquarium pumping in a billion gallons a year of seawater from the bay.

One can even get up-close-and-personal by touching bat rays or starfish.

“They’re slimy,” was the common response when touching the rays.

The touching pools host large crowds around them.

“These are whatever we find in tide pools in the bay,” said Roberta, one of the aquarium’s 1,200 volunteers who support the 425 staff members. “They’re OK to touch, but just don’t move them. You wouldn’t want to be moved from your home,” she reminds a group.

Much of the aquarium’s recent activity has occurred outside its walls.

“We’ve had a lot of whale activity,” volunteer Fred said. He was managing transmitters on the patio overlooking Monterey Bay that record sightings of sea life. That morning, dolphins, seals, sea lions and sea otters made the list.

The sea otters are the stars of a new auditorium program launched this year.

Another star is of the culinary variety. Chef Cindy Pawlcyn has substantially upgraded the aquarium’s oceanfront restaurant. (Foodies will know her from Fog City Diner in San Francisco, Mustards in Yountville and her two other restaurants in St. Helena.) Menu choices follow the seafood watch guidelines and use many types of local produce, dairy and proteins.

• Off Highway 1, south of the Bay Area