Fallen Leaf Lake will not have an election next month because El Dorado County Board of Supervisors filled two positions via appointment.

Larry Calof and Steve Malley were the only two to apply for the vacancies on the board. The county had the option to make the appointments or go through with an election. This expedited matters and saved the district money. 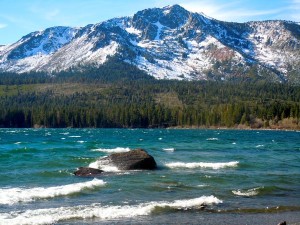 It’s not just the water that is turbulent at Fallen Leaf Lake. Photo/LTN file

But now there is another opening.

The Fallen Leaf Lake Community Services District board was supposed to meet Jan. 26, but board member Wanda Kownacki resigned via email the day before. She has not returned a call from Lake Tahoe News.

Her departure left only Tom Bacchetti and Stephanie Neidig on the board at the time, so the meeting could not be conducted. Calof and Malley were appointed Jan. 29.

A special board meeting has been called for March 9. At that time it is hoped people will have applied for Kownacki’s seat and the four board members can make an appointment.

An item from the January agenda moved to March’s docket centers on the possibility of forming a citizens’ advisory committee regarding the ongoing issue of who has the right to vote at Fallen Leaf Lake.