In January 2010, there were 158 registered voters in the Fallen Leaf Lake Community Services District. By August 2010, that number had grown to 461.

This flood of voter registrations was spurred by political turmoil in the area. However, such a significant increase in voters over such a short period of time does not go unnoticed. A voter fraud investigation was opened by the El Dorado County District Attorney’s Office and the California Secretary of State’s Office. 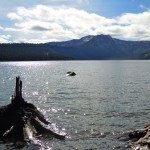 It's a new day for voters at Fallen Leaf Lake. Photo/LTN file

Much of the political divide within the Fallen Leaf Lake CSD revolved around the replacement of longtime Fallen Leaf Lake store and marina operators John and Ruth Rich. Even though the board of directors voted unanimously to replace the Riches on two occasions, the community was sorely divided. In July 2010, residents petitioned for a recall election to replace two of the board members. The recall election was approved, and voter registrations started pouring in.

An investigation was launched that lasted just more than a year and identified felony voter fraud. The determination was that many of the voters who voted in the August 2010 election were not legally eligible to vote in the Fallen Leaf Lake Community Services District. Some were ineligible because Fallen Leaf Lake is not their legal domicile, and some were registered to vote in more than one district.

On Sept. 19, 2011, District Attorney Vern Pierson issued a letter to every voter registered at the time of the August 2010 recall election outlining the department’s decision in the matter.

The letter states, “This investigation revealed that improprieties had in fact occurred, and were criminally subject to prosecution as felony-grade offenses. Largely because the acts appear to have been precipitated by poor judgment, some misinformation which was circulating in the community, and a failure by some to accurately and fully appreciate the requirements of the pertinent law, this office has determined to decline prosecution at this time.”

While the fraud findings do not negate the results of the election in question, the letter goes on to say that any similar future violations will be prosecuted.

Pierson said he declined to prosecute because he saw no malicious behavior on the part of the voters, and attributed the fraud to negligence and misunderstanding of the law.

This type of issue comes up from time to time in areas with a lot of vacation homes, he told Lake Tahoe News. What it essentially boils down to is where a person’s domicile, or primary residence, is. Voters are entitled to vote and hold office where they intend their domicile to be, and only in that place.

The El Dorado County Assessor’s Office lists 289 land parcels in the Fallen Leaf Lake area, some of which are vacant land, commercial property and U.S. Forest Service cabins. The official list of voters from Aug. 10, 2010, lists some addresses as having five, six and seven voters registered at a single address.

With only about a dozen people living at Fallen Leaf Lake full time, this prompts the question that if only people who consider Fallen Leaf their primary residence can vote and hold office, would the entire district be run by that handful of people?

This quandary has left homeowners with the task of trying to figure out how to effectively and legally run their community. One idea being considered is allowing a set number of votes per parcel.

As for the election coming up in November, Fallen Leaf Lake CSD does not have anything slated for the ballot, but the registered voters will be receiving ballots for Measure R, Lake Tahoe Unified School District and Lake Tahoe Community College. The next scheduled election will be June 2012, leaving residents some time to find a solution.

In the meantime, however, the El Dorado County Elections Department has also issued a letter to Fallen Leaf Lake voters reminding them of registration regulations and the district attorney’s decision on the matter, as well as providing instructions on how to remove themselves from the voter list.

As of Aug. 8, the number of registered voters in the Fallen Leaf Lake CSD was down to 267.