VAIL — With just a passing glance of the sweeping views off the Mountaintop Express chairlift at 11,250 feet, it’s difficult not to get naturally sentimental about how a vision of a mountaineering soldier turned into Colorado’s premier ski resort and the flagship for a corporate empire running nine ski area properties. Heavenly, Northstar and Kirkwood are among them.

In 1957, rancher and engineer Earl Eaton and Pete Seibert – who was a member of the U.S. Army’s 10th Mountain Division in World War II – climbed to the top of Vail’s distinct ridge that divides the front side and its massive back bowl area that stretches seven-miles across. The founding duo was seeking an adventure that would keep their feet in the mountains professionally and personally. 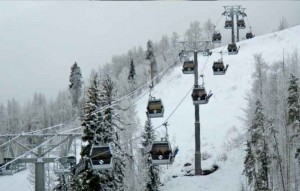 The One gondola opened in November at Vail. Photos/Kathryn Reed

Five years later in December, Vail opened with one gondola and two chairlifts – two-person seats with wooden slats, fewer than 50 employees and two bowls to frolic in, Sunup and Sundown. A lift ticket cost $5.

Sometimes he remembers those days like they were yesterday. His late father was engrossed in getting the ski area off the ground, but had fun in the process.

“(Dad) used to say that if you’re doing it right, you don’t need a vacation. He never complained about what was going on. He loved the whole process. I think it was because he saw how each day’s progress fit into his ultimate dream. His stories were about the characters working on the mountain or the next ‘big thing’,” said Seibert, one of three children. “(Dad) passed on the ‘mountain’ side to me.”

The 57-year-old Vail real estate executive, who has worked for Slifer Smith & Frampton Real Estate for 20 years, grew to love skiing through his father.

“I would get out of school every day at 1 and skied every day, and that’s what my childhood was like,” he said.

What were his favorite runs?

This depends on the snow conditions. But the protégé has a fondness for China Bowl, especially in the spring with its grainy corn snow. The Genghis Khan run serviced by the Tea Cup Express chairlift provides wide-open, steep terrain that looks like something straight out of a Warren Miller film.

Then again, Seibert Jr. was influenced by the legends of the sport.

“Of all the runs we skied, I’d have to say Riva Ridge was my favorite. I learned to love big sweeping turns from following (dad),” he said. “The other part to skiing Riva is to roll right into Tourist Trap without stopping.”

The 4-mile run that starts between the Mountaintop Express and Northwoods chairlifts empties into the Vail Village. At the time, the Village, as it has become to be known, was a small collective of shops the neighborhood children roamed in until it was time for supper at home.

“(The kids) always skied with friends and visited the shopkeepers.

“Everybody knew us. We would go to the deli and if a parent was looking for us, they’d say: ‘He was here 15 minutes ago.’ In the summer, it was real (Huckleberry) Finn stuff,” Seibert said.

Vail has embedded itself into Seibert’s life.

“In the beginning, everybody was in it for the success of the area. It took teamwork to survive – from the (ski area) employees to the shopkeepers,” he said. “(Dad) was convinced it would be successful from the start.”

Seibert left Vail to attend Middlebury College. He returned to Vail to work on the ski patrol, followed his father to Snowbasin, Utah, then moved on to Sun Valley, Idaho, working at Bald Mountain. He came home to Vail 26 years ago, and now with children of his own, is dug in to his home base.

A lot has happened along the way to this gigantic ski mountain that lives up to its tagline: “Like nothing on Earth.”

The skiable terrain amounts to 5,289 acres. Almost 200 runs are blanketed with an average of 366 inches of snow per year. Vail’s staff members provide complimentary tours including those reaching Blue Sky Basin – the farthest back bowl that provides some of the most fun one can have outside. It opened a dozen years ago. Two years after, Seibert Sr. died of cancer at age 77.

Today, express chairlifts line the multi-mountain resort and spread the million skiers and snowboarders out. By California’s standards, it’s hardly crowded – even on the weekend.

“While the technology has given us faster lifts and better equipment, the best part is we get more runs in, and there is more to ski,” Seibert said.

In honor of its 50th anniversary, Vail replaced the Vista Bahn chairlift and unveiled in November the One Gondola based at the village. The 10-seater cars (probably six-to-eight comfortably) comes equipped with WiFi capability for the technology crowd and heated, padded seats for when it’s chilly. It ends at the mid-Vail area.

Much has changed in chairlift technology.

So to appreciate what it had in the past, the largest ski resort in the United States placed an original Bell Gondola car at the village base where the new one is located.

On a recent run, the new gondola stopped for what seemed like half a minute. As passengers relished the quiet scene, a Denver man noted: “This doesn’t usually stop this long.”

The ride time is just less than eight minutes, traveling 1,200 feet per minute.

“One” – named as a tribute to Colorado’s first “Bell” gondola — is swift, comfortable and apparently reliable.

Of the 111 cars, the 50th is painted gold as a reminder that the lift represents an integral part of Vail’s celebrations honoring its heritage.

Along with its returning events such as the Taste of Vail and Vail Film Festival, Vail has scheduled a few new ones for its big occasion. They started last December and span the ski season into April.

In February, the ski area switched its attention from the downhill skiing exploits of mega host athlete Lindsey Vonn to snowboarding. The ski area introduced a 22-foot halfpipe in order to host the Burton U.S. Open Snowboarding Championships, which was staged in Vermont for the last 30 years.

Vail plans to cap off its 50th birthday season with Ski Heritage Week. The April 8-15 event will feature the U.S. Ski and Snowboard Hall of Fame Annual Induction Ceremony. Seibert was inducted in 1980.

Fitting indeed, considering that steps away from ground zero for Vail Mountain lies the Colorado Ski Museum. Inside, the historic site plays a DVD featuring the founding of the resort as a sentimental, passionate tribute to Seibert and company.

One could almost imagine what Eaton and Seibert were thinking when they hiked to the top.

“It’s a once in a lifetime opportunity for me to be a part of something that has significantly contributed to who I am and how I feel about skiing and snowboarding, the mountain, the town and my home,” Vail Senior Vice President and Chief Operating Officer Chris Jarnot told Lake Tahoe News.

One can visit a small plaza called Seibert Circle off Bridge Street built in Seibert’s honor. Riders may also feel his spirit in Pete’s Bowl off Blue Sky Basin. Others may experience the late Eaton’s by dropping into Earl’s Bowl on the perimeter right alongside Pete’s.